In the aftermath of the disastrous Super Typhoon Haiyan in the Philippines and a tropical cyclone that devastated northern Somalia last week, Qatar is holding a range of fundraisers on Tuesday, Nov. 19 to help survivors.

The solidarity day, which has the backing of the country’s Emir, aims to help alleviate the suffering of those affected by the natural disasters, Qatar Red Crescent Society Chairman Dr. Mohammed bin Ghanim al Ali al Maadid said, as quoted by the Qatar Tribune. He continued:

“Driven by a long history of supporting vulnerable people everywhere regardless of their religion, race (and) color, we aim to relieve the victims by raising money and donations in kind. We also wish to pay tribute to our Filipino and Somali brothers and sisters who continue contributing to our development process and renaissance.”

In a statement released Monday evening, QRC, which recently launched an appeal to raise $2 million for the Philippines, said that as part of the solidarity day, fundraising activities would be held in schools, offices and public places, including at:

Typhoon Haiyan (termed Yolanda domestically), which struck the central islands of the Philippines last weekend, has killed nearly 4,000 people at latest count. Another 1,600 people have been reported missing.

In Somalia, a cyclone in the northern region of Puntland has prompted a state of emergency after killing at least 300 people, with hundreds more missing. Aid agencies have been having trouble reaching those in need because flood-hit routes have become inaccessible, Al Jazeera English reports.

According to QRC, residents should also be able to donate to relief efforts through SMS and bank transfers.

To SMS funds, residents can text “S” for Somalia and “Ph” for Philippines to the following numbers (note, the amount you donate is determined by the number that you SMS):

Donations can also be made to Qatar Red Crescent, Qatar Charity, Eid Charity, Raf and Alasmakh in the malls.

Meanwhile, the Philippines Embassy in Doha has been working with umbrella groups to collect financial and in-kind donations.

Schools are also getting involved.

Speaking to Doha News, Ben Vaughan, a teacher there, said 15 staff members and several students are from the Philippines:

“Some have had family members affected by the tragedy. We are asking our children to bring in items to help with the cause. We have asked them to bring in items to help the families rebuild their lives and items such as toothpaste, toothbrushes, soap, shower gels, towels, blankets, kitchen items, small toys, non perishable foods, tinned and canned foods, old clothes, old football kits, shoes or any other old and unwanted clothes.

Additionally, QRC said that the Philippine School in Doha has collect more than QAR35,000 for the typhoon survivors. The school marked today with artwork produced by students portraying the dismal WHO: MERS virus ‘not a public health emergency’ 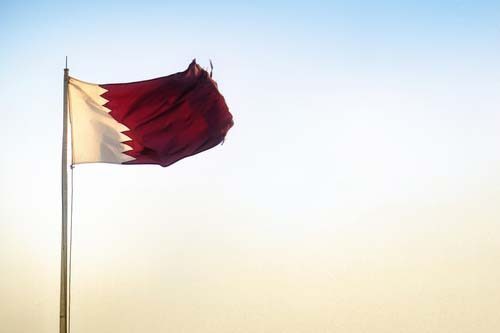