As Doha’s development carries on at a frantic pace, moving Qatar toward a future with vastly different infrastructure, researchers here have been working to ensure that the nation’s past isn’t forgotten.

As part of those efforts, University College London Qatar (UCL) has been managing the The Origins of Doha, a project supported with $876,000 from the Qatar National Research Fund.

Earlier this month, researchers with UCL and the Qatar Museums Authority began an archaeological dig at the location of the oldest part of Doha, near Souq Waqif. The excavation is part of a three-year project that focuses on:

Project leader Robert Carter, senior lecturer in archaeology at UCL Qatar, told Doha News that much of the city’s distant past – what daily life was like, how people dressed, how wealthy they were – remains undiscovered.

The team is, however, moving closer to finding the answers to some of these questions.

Their latest dig seeks to discover what Doha – which began life as a walled city – was like in the 19th century. According to Carter, who said the team is attempting to locate part of the wall:

“If you’re standing in the souq and looking at the sea, immediately to your right there would once have been creek. On the other side of that creek was the original part of Doha, which was there from at least 1860, and probably there from 1800 or earlier.”

The dig site, which has been cleared of buildings and is protected by fencing, is next to the Qubib mosque.

Work began just over a week ago, and already, the project’s small team have made some interesting discoveries, Carter said.

“There are two meters of archaeological deposits, and given enough time we will be able to show what the city looked like in 1860, and probably much earlier.

So far, we’ve found pieces of pottery and food remains, and the outline of buildings with courtyards and interior floors. We’re also currently digging down an alleyway. Most of what we’ll find won’t be spectacular, because it relates to everyday life, but that’s what we’re interested in, in this case.”

It’s hoped that many of the team’s findings will eventually be displayed in the city’s under-construction National Museum, which is expected to be completed at the end of next year.

Last year – the first year of the project – the team carried out a dig at the Msheireb Downtown construction site, assessing the history of the area before new construction erased all evidence of it. Carter explained:

“In the floors of one house, we got a very rich amount of data relating to daily life. We found pottery which meant we could date the spread of Doha to that area to a particular time – the 1920s and 30s. That tells us something about the expansion of the city. There doesn’t seem to have been anyone living there before the 1920s, except for scattered temporary houses.”

Aside from digging in the dirt, The Origins of Doha team and a team from the QMA have also embarked on a project to photograph and document the city’s oldest remaining buildings, many of which date from the 1950s.

In a global context, these buildings might not seem old, but many are actually already disintegrating, Carter said:

“These buildings were not designed to stand for this long. Their architecture was designed to be temporary, to be regularly knocked down and built on again. Many of these buildings have been abandoned, and the ones which are still occupied are held together with patches of wood and plaster.”

He added that QMA is working on a strategy to have these buildings restored in a way that they can still be used, “but not becoming monuments.” 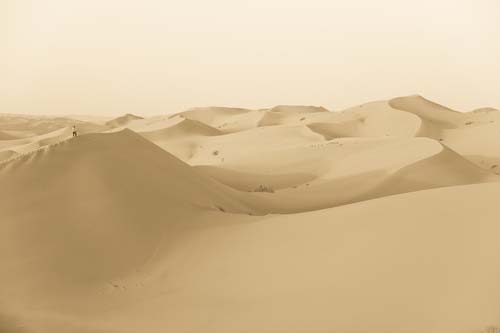