Updated to include witness testimony and the name of deceased.

At least one Qatar resident has died and several others have been hospitalized after a bizarre car accident that took place late Wednesday afternoon in the airport area.

According to witnesses, a speeding vehicle apparently lost control, crossing several lanes of traffic and a service road. It jumped several curbs, hitting people and a few cars, before landing upright on top of an SUV in a parking lot of a shopping complex on Airport Road.

The vehicle, a traffic police car, struck a man who was walking into the Al Shaheen building, near Hardee’s, and immediately killed him. Speaking to Doha News, a representative of the Philippines Embassy here identified the man as Delfin Pastrana Santiago, who died six days before his 53rd birthday.

Santiago’s cause of death was ruled as “crushing of head due to road traffic accident,” the representative said. He worked for Qatar Airways, according to staff there, and is survived by his wife and two children.

Gulf Times reports that several vehicles and people were caught in the out-of-control SUV’s trajectory:

Before hitting the victim, the vehicle had hit a vehicle in which a Qatari family was travelling, injuring the mother and two of her daughters. It also hit seven parked cars, finally settling on top of one of them.

According to one witness, who was parked at the scene while waiting for someone yesterday afternoon, heard the sudden loud screeching sound of brakes, and saw a car in the left-most lane of Airport Road being cut off by a speeding SUV.

He told Doha News that the vehicle ended up striking the car in the left lane, which got pushed onto the curb, hit the metal rail, and then came back onto the road, crashing back into the SUV, which was tipped onto its two right wheels. He continued:

“So instead of only crushing him, the first car literally went below the police car, lifting him up and making him fly to the right over the lanes of Al Matar until it bumped a couple of times before ending up over the SUV in the parking lot.

I didn’t see clearly where the bounces were from my position – apparently one was in the service lane, and the next in the parking lot area. Immediately after that, I saw the man in the first car get out and was walking, and the driver of the police car was moving.”

The driver of the vehicle that lost control is said to be a Pakistani expat, working in Qatar as a traffic policeman. He was briefly arrested, but has been released on bail, the victim’s family friend said.

During a visit to the site by Doha News on Thursday, debris could be observed in the area, but the vehicles had been removed. Employees at Al Shaheen declined to comment on what happened.

Photos of the crash have been circulating on social media, showing a Toyota SUV of an unidentified model atop another, crushed SUV that is parked outside of Al Shaheen.

In some of the pictures, which Doha News has chosen not to publish out of respect for the families affected, a man is laying on the concrete and not moving, as first responders attend to the scene.

The pictures have prompted a storm of comments from residents, namely highlighting the recklessness of drivers on the roads here. Gulf Times reports that at least two other people died in car accidents this week.

In a Facebook discussion about the photo, Razzak Moosani said:

“People driving fast on busy roads not only risk their life but others life too.”

“Qatar is trying hard with many campaigns like onesecond etc.. but it is just a moment of hurry or distraction.”

@dohanews @MayasaQbs such a deadly accident by a police car in a service road,IDK what exactly happened but I am speechless @MOI_QatarEn

The police officer is slated to be in court this week. Thoughts?

Note: This article has been correct to reflect that Santiago has two children, not three. 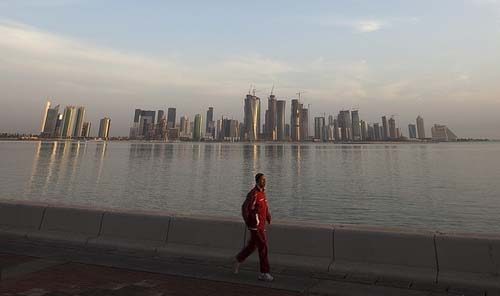