Many shoppers were interested in checking out the dozens of new brands that were previously not available in Qatar, including Pottery Barn and Leftie’s. Others were hungry to try the nation’s first Cheesecake Factory.

Here are a few things to know about the QR5.4 billion mall:

MOQ is located in Al Rayyan and is about a 10-minute drive in light traffic from Slope Roundabout near Education City.

To get there, head west out of Doha on Al Luqta St and pass the Qatar National Convention Center. Keep following the road as it becomes Dukhan Rd.

Just before the Amiri Guard base, there is an exit on the right that is clearly marked for the Mall of Qatar. Follow the signs — you can’t miss it. And parking is free.

The mall is open from Saturday to Wednesday, 10am to 11pm; and from 10am to midnight on Thursday and Friday.

It has over 500 shops, including 100 food and beverage outlets. Speaking to reporters, mall CEO Ahmed Al Mulla said about half of those venues opened yesterday.

More than 80 brands are new to the country, such as US home goods store Pottery Barn, Texas Roadhouse restaurant and clothing store Leftie’s, which were all open yesterday. A 19-screen Novo Cinemas is also screening movies already.

Additionally, the mall has lots of old favorites, include grocery store Carrefour, Centrepoint, H&M and Starbucks.

However, miniature children’s city Kidzmondo and Qatar’s first Hamley’s toy store are expected to launch within a month’s time. The Lego Store is also not yet open.

MOQ has a massive food court spread out over a central atrium that has dancing, multi-colored fountains.

They are surrounded by four giant columns that have a mix of real and artificial plants.

Among the most popular places to dine yesterday were Qatar’s first Cheesecake Factory, Eataly and several fast food venues. Other restaurants include Pf Chang’s, Carluccio’s and Shakespeare & Co.

4) No phone service for Vodafone users

For mobile users with Vodafone, there is little to no service inside the mall for now. However, officials said they are working with the government to sort this out within a few days.

The best way to ensure a smooth exit is to park in the underground parking lot.

This way, you can take the new tunnel that leads out of the complex. The 1.5km-long tunnel opened on Friday to help funnel traffic out of the mall and onto the Dukhan Highway.

Have you checked out MOQ yet? Thoughts? 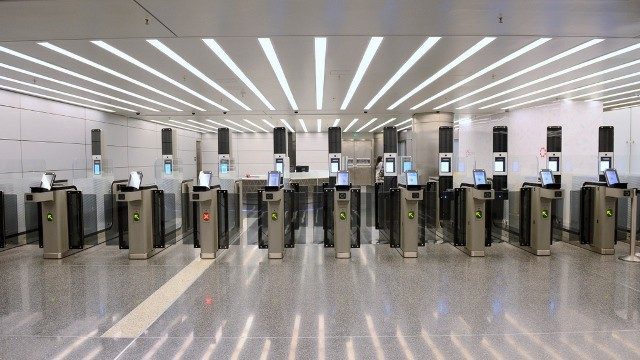