The UCI Road World Championships kick off in Doha this weekend.

Hosted for the first time in an Arab country, the tournament commences with team time trial training on Oct. 8, while races start the following day and run until Oct. 16.

Several parts of Qatar will be temporarily closed off for the event, including the Pearl-Qatar, where a number of lanes have already been reduced.

From route information to road closures to how you can watch the championship, here’s what you need to know.

The finale of the upcoming cycling championships is the men’s elite road race.

The race runs a grueling 257.5km, starting at the Aspire Zone and heading through Education City.

It then goes across to Onaiza and up past Qatar University before heading north to Lusail sports Arena and up past Al Khor.

The riders then head south past Lusail City and onto the Pearl, where they will do seven 15.2km laps of the island to reach the finish line in front of the Marsa Malaz Kempinski hotel.

However, in a statement on its website, the UCI said the first 150km part of the route of that race may be shortened if temperatures are thought to be too high for the cyclists.

Many of the other races finish with multiple laps of the Pearl, but these also may be reduced.

As part of a “beat the heat” initiative, a group has been monitoring conditions since the end of September.

Four experts will examine the weather forecast and meet before each race, UCI said.

They include medical experts from Aspetar.

With the worst of the summer heat and humidity now gone, temperatures have slowly been falling in Qatar.

However, humidity will be around 75 percent as rains are forecast for next week, the Qatar Meteorology Department said.

The date for the championships has already been pushed back because of the Olympics but also to avoid the worst of the Qatar summer heat.

Final preparations are underway for the championships, which have come under fire from some Pearl residents because several road closures will take effect.

Water taxis, golf carts and shuttle buses will ferry residents on and off the island during the races when most of the roads will be shut to traffic.

Earlier this week, organizers held a series of Town Hall meetings with people living and working on the island and with the public.

In a statement, the chairman of the local organizing committee called for residents’ “understanding and patience” during the event.

“None of the cities that hosted past events were built to facilitate a UCI RWC (road world championships), hence we kindly ask for your understanding and patience,” Sheikh Khalid bin Ali Al-Thani, chairman of the event organizing committee, said.

“You must also take into consideration that you are privileged to enjoy the unique opportunity of having a prestigious sporting event held right next to your door.”

In addition to the men’s elite race, four other races will take place across Qatar – including the women’s and men’s team time trials on Oct. 9.

There’s also the men’s elite individual time trial on Oct. 12. All start in Lusail City and finish on the Pearl.

Finally, the women’s elite road race on Oct. 15 starts at Education City and snakes through Gharafa, Duhail and West Bay Lagoon before reaching the Pearl.

Details of the closures for the roads affected by these races have yet to be released.

In addition to the expert races, a mass participation event, the Ride of Champions, will take place on Oct. 15 around the Pearl from 7am until 10am.

This public event, for which registration has already closed, will start at the Doha Exhibition Center and head north past Katara and onto the Pearl, where participants will complete a lap.

To prepare, works are being undertaken to the last 1.5km stretch of road on the route, removing and adapting traffic islands, UCI said.

Cycling fans who want to get in on the action can visit a family fan zone at Costa Malaz beach on the Pearl.

This will have entertainment including BMX stunt riders, refreshments and cultural displays. Opening times are on the event’s webpage.

Spectators can head down to watch all the races in person, or they can be viewed live online on the UCI YouTube channel. 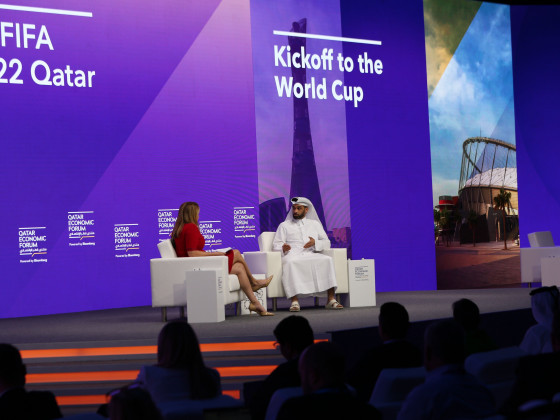