Updated at 9:30am on May 28 to include the complaints of passengers traveling during the afternoon and evening rush.

With reporting from Ankita Menon and Nada Badawi

At 9:43 this morning, Qatar Airways Flight 183 to Vienna became the last ever commercial passenger flight to take off from Doha International Airport (DIA).

The plane left more than an hour late, due to a rush of other flights that take off in the mornings. DIA’s runway was made even busier by empty Qatar Airways jets flying to the new Hamad International Airport, and moving into position for departures later in the day.

The remaining airlines, including Qatar Airways, follow some 15 other carriers that have already shifted over to the new airport over the past month, following HIA’s soft launch on April 30.

Doha News visited DIA early this morning to speak to some of the airport’s last passengers.

Long-term expat Aladdin Saleh, who was en route to Uzbekistan, told Doha News that he felt sentimental about the airport’s closure:

“Of course, I will miss it. It’s kind of a landmark. But the new airport is very nice, more spacious and it’s bigger. The only thing I will miss about this airport is Costa Coffee.”

To reduce any confusion about the move, airport staff had erected prominent posters about the shift, and most travelers appeared to be aware that HIA was becoming fully operational today.

Inevitably, some passengers still arrived at the airport in error, but ground staff and security personnel directed people to the new airport, pointing them in the direction of free transfer buses if they did not have a car.

Once the last flight had been checked in, staff quickly began the process of dismantling the area around the desks, piling signs, baggage tags and unprinted tickets into grey plastic boxes, ready for disposal.

Meanwhile, at the Arrivals Terminal, Coffee Beanery was also being disassembled, and vans were being loaded with furniture.

Then, shortly after 9am, the departure boards at DIA were cleared, signaling the end of one era and the beginning of another at HIA, which took over all commercial airline traffic this morning:

The departures board at #DOH is now empty. #endofanera #Avgeek welcome to the new and incredible @HIAQatar pic.twitter.com/6ghCCfUu1x

Meanwhile, the first Qatar Airways flight to touch down at HIA was Flight 1113 from Bahrain. On Twitter, Gazanfarulla Khan reported than the airport’s air traffic controllers wished the aircraft’s pilots “a good landing”.

Sensibly, Qatar Airways chose a relatively quiet time in their schedule to make the move from DIA to HIA – a transition for which officials had years to prepare following a series of delays in opening the new airport dating back to 2009.

Operations appeared to get off to a smooth start at the new facility on Tuesday morning, with only a handful of flights scheduled to arrive and depart before lunchtime.

In fact, it was hard to spot a passenger among the hundreds of cabin crew, ground staff, administrators, janitors and other employees milling about the terminal, many of whom were clustered around supervisors leading them on a tour of the new facility.

At 8:30am, almost every Qatar Airways check-in desk was staffed, even though the carrier’s first departure – an 11:30am flight to Bangalore – wasn’t scheduled to leave for another three hours.

Meanwhile, Mowasalat stationed three coordinators just outside the arrivals hall to direct travelers to taxis. A supervisor told Doha News that 300 cars were on call to receive the incoming passengers. “We’re ready,” he said.

Similarly, the outbound passport control desks also appeared to be nearly fully staffed, with more than 15 immigration officers at their counters and another half-dozen walking around the area.

In total, roughly 11,000 employees were working at the new airport on Tuesday, including Qatar Airways CEO Akbar Al Baker, who was seen pacing the departures area, giving instructions over his cell phone.

“Every small thing, I have to get upset and remind people…” he said into his phone at one point.

In a brief interview with Doha News, Al Baker said his initial reports were that everything was functioning smoothly:

“Everything is fine. I have all my chief officers present, monitoring each pre-allocated function of the airport … I’m supervising making sure that everything is happening correctly. We are here for any eventuality. It’s a new airport. With everything new, there could be last-minute hiccups. In order to mitigate this risk, we have all the senior management of Qatar Airways present.”

He also announced a new route for the upcoming A380s:

And finally, Al Baker said he expected between 40,000 and 45,000 passengers to pass through HIA on Tuesday.

The airport is expected to face its first real test during busy periods, such as the early evening and around midnight, which were traditionally “crunch” times at DIA.

To this end, a spokesperson for HIA confirmed to Doha News today that during busy periods, “remote stands” – aircraft parking spots away from the terminal – will need to be used to accommodate all flights, meaning that some passengers will still need to take a bus to their aircraft.

This news will no doubt disappoint many passengers, who’d hoped that DIA’s closure would consign the Doha airport bus ride to history.

Down in HIA’s arrivals hall, some 20 staff from the St. Regis Doha were present this morning to greet passengers, standing in a row and handing out bottled water, teddy bears and flowers.

One man coming from Abu Dhabi said he stood in the passport control line for two minutes and arrived in the baggage hall to find his checked suitcase already on the belt.

By midday, passengers were reporting slightly higher queue times of around 10 minutes.

Despite a promise that all 70 retail outlets and 30 eateries – most of which are located beyond security – would be open by Tuesday, Argo Tea Cafe on the lower level could still be observed as under construction.

By the late morning, more outbound passengers had started to arrive in advance of some 20 flights leaving between 11:20am and 1:30pm. However, there were minimal lineups at check-in and no line at the passport control at Departures.

One passenger traveling on a Qatar Airways flight to London said check-in took slightly longer than usual – “You could tell some of the staff were new,” he said – but described the transition to the new airport as “seamless” from his perspective.

Despite getting off to what appeared to be a smooth start, passengers began reporting problems later in the day as flight volumes increased.

@dohanews @iloveqatar How long can it take to move cases from a plane to an airport…. So far 90 minutes and waiting.. #HIAQatar

Additionally, a Doha News reader reported that passengers on an evening flight to Dubai contended with filthy washrooms, long concession lines and problems with the airport’s e-ticket readers.

Did you travel through the new airport today? Thoughts?

For those who have never been to HIA before, here is a helpful guide to navigating the new airport.

And for those who are feeling nostalgic, here’s a list of what we’ll miss (and won’t miss) about Doha’s old airport. Six things to do in Doha this weekend 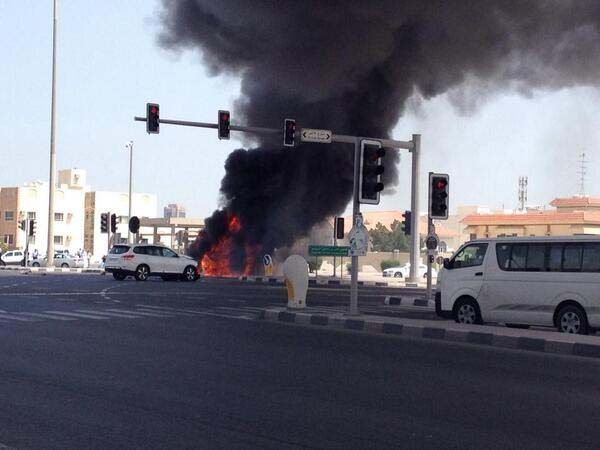 I ordered a cream cake and the cashier asked for my boarding pass to process the order. Can someone please explain why every passenger needs to do this.

I thought maybe they would want to discourage their own staff from getting something……so now I will not only need to show my boarding pass at the security & check-in counter but also at duty free stores as well…..this is a little annoying…..

They do it at all UK airports. I think its partly statistics, but in the UK its also to do with tax reasons – if you are leaving the EU you dont pay VAT and duty. Not sure if that is applicable here though.

?? I’ve been to many countries, and they do ask for the boarding pass too.. It’s not a new thing, I’ve been asked for my boarding pass when I was buying gifts from LAX duty free last week..

They could implement such data collection systems in the much needed health care sector, I don’t find sense with collecting data of tourists or traveller who many not visit the country frequently and the expat population who are only paid guests, only to leave the country one day…..

madness – i’d tell them to shove the cake, if I was asked —– big brother gone mad

““Every small thing, I have to get upset and remind people…” he said into his phone at one point””

I’m not exactly a fan of the guy, but I don’t think this was newsworthy

Observant One
Reply to  Sarah010

I don´t see anything wrong by that comment, furthermore; I find it quite newsworthy, showing us once again the despotic way some persons practise their “leadership”.

Is it a little hot inside the new terminal or is it just me? 😀

Yes I found it little humid as well…..

My wife just had the worst experience flying to Dubai.
1 – her electronic ticket couldn’t be read so had to spend 45 minutes in lines.
2 – after walking 20 minutes to her gate, there was no shops open for the water she needed.
3 – She then tried to use the toilet, however it was in a horrible state. Blood and faeces on the floor and no toilet paper. No cleaner in site.
4- Walked back to where there was a shop selling water. 50m line and only one person serving at a till. In 10 minute the line did not move. She couldn’t not wait any longer
5 – At the gate there were not enough seats so people where sitting everywhere.

My question, why open when you’re obviously not ready. We were both so excited about the new airport but now…

I too had a concern with the seating, I took gate A8, this Gate did not open about an hour before the flight departed, I could not find enough seating arrangement around the gates…HIA need to implement more seating facilities…..

Looks like the bus drivers have managed to keep their jobs. Very caring of Qatar Airways not to provide enough contact stands in the new airport.

What a blessing to hear that we STILL have to take buses for some flights.
15 billion dollars and they didn’t build enough gates for the aircraft?
What a joke.

With every new article we get more not so great information. First was that the premium lounges will now not be open until July, next was not all food and shop outlets are open and now in this article buses will still need to used when its busy. I am sure I am not the only who is now somewhat disappointed buses will still need to be used.
I am now waiting for the next surprise.

Let’s wait and see what it costs to park there. The parking at the old airport was ridiculously cheap.