When Dr. Muneera Al Fadala first decided to study veterinary medicine, she recalled facing a great deal of pushback from her relatives.

“They told me that animals are dirty and filthy and I shouldn’t work with them,” the now 28-year-old Qatari recalled.

But years later, that initial dismay has turned largely into pride, after seeing Al Fadala in action as one of the country’s first local veterinarians.

Explaining the challenges and rewards facing Qataris in her profession, Al Fadala, who appeared on Al Jazeera Arabic last month, shared her journey with Doha News ahead of International Women’s Day.

Because she works for the government, she often comes face-to-face with fellow nationals as they seek treatment for their pets or livestock.

They are often astonished when she comes to their aid, she said, often asking, “Are you absolutely positive you’re a Qatari female vet?”

“Many told me they want their daughters to turn out like me…and the young girls would tell me they want to become vets too, but they are too scared of (being judged by) Qatari society and culture.”

Al Fadala rejects the taboos associated with caring for animals, describing treating such beings as a very “human” profession.

“Animals cannot talk or express their pain – they are souls that need our care and compassion,” she said.

She added that veterinary medicine is not just about treating pets. For example, people depend on the wellbeing of livestock and chickens for example, to provide them with “healthy milk and meat” on a daily basis.

”Some diseases that affect animals can be transmitted to people as well,” she said. “Without vets, the society would collapse.”

She added that she hoped more Qataris and Arabs here would consider joining the profession, as most vets here hail from western nations.

Al Fadala said she has loved animals ever since she was a little girl, playing with them on her grandfather’s farm.

She decided to become a vet when she was only 10 years old, after finding out that a stray cat in her neighborhood she used to play with became injured.

”I used to clean her wound and wrap it with gauze around two to three times a day, (and) I could see her getting better day after day,” she said. “She started to walk again and that’s when I fell in love with the profession.”

But despite her passion to help animals, moving forward with her dream was not going to be easy.

There is no school in Qatar that offers professional degrees for aspiring veterinarians.

According to Al Fadala, this is because few locals here are interested in pursuing careers as a vet, as “most Qataris don’t believe the profession is sophisticated or prestigious like medicine for example.”

This meant Al Fadala would need to go abroad to pursue her ideal career path – a tough decision for many young Qatari woman, whose families prefer they matriculate close to home.

Al Fadala studied veterinary medicine for five years at Cairo University in Egypt, during which her parents visited her frequently, she said.

Their support, as well as the encouraging words of her two older brothers, played a crucial role in encouraging her to follow her ambitions, she said.

The most difficult challenge she faced was being away from home, her family and friends while studying for her college degree.

”I used to count the hours and days left for me to get back to my country,” she said, adding that the drive to realize her dream job was more powerful than any challenge.

Today, she is one of only three Qatari vets, including one man and another woman.

They have previously called for the establishment of the university in Qatar to encourage more nationals and residents to study the profession, but so far to no avail.

The first time Al Fadala wore her white veterinary coat, she broke down in tears:

“I saw how I looked in the mirror, I got goose bumps all over and started crying because I couldn’t believe that I finally achieved my dream,” she said.

The number of Qatari women in the workplace has been growing slowly in recent years, and female university students in Qatar outnumbered men 2:1 in 2012, according to government figures.

Qatar also ranked among the top Arab nations for women’s rights in a 2013 poll conducted by the Thomson Reuters Foundation.

However, women still have a ways to go here.

For example, of the 29 Qataris that comprise the Central Municipal Council, only one is a woman. And Qatar only appointed its first female judge in 2010.

Meanwhile, Qatar has continued to fare poorly in a separate gender report from the World Economic Forum. The WEF has said that Qatar does well in offering equal educational opportunities to women, but suffers from a widening gender pay gap.

Fortunately for Al Fadala, as one of the nation’s only Qatari vets, she is in high demand. After graduated with honors in 2012, she responded to a want ad for local veterinarians at the Ministry of Municipality and Urban Planning and got the job immediately.

“My mom is the one who told me about the ad and encouraged me to apply,” she said.

Al Fadala is currently practicing her profession in clinics affiliated with the Ministry of Environment.

She pointed out that the clinics offer free treatment, vaccination and operations for both Qatari and non-Qatari residents.

She also oversees a ministry department that catches and neuters stray cats and dogs before releasing them instead of putting them down, in a bid to reduce their negative effects on the community.

“There needs to be a balance in the environment… There’s a need for cats for example to deal with rodents, and we need rodents to deal with insects and so forth,” she said.

Keeping an eye on the future, the vet said she wants to continue her graduate studies and major in treating horses.

“Horses are a main part of our Qatari identity and culture,” she said.

Al Fadala is currently training at the horse racing club to obtain an international license that would allow her to be part of the disciplinary committee involved in international horse beauty contests.

The committee’s responsibility is to guarantee that horses participating in the contest meet the required conditions.

Her exam for the license is in April and if she succeeds, she’ll be the first Qatari female to hold that post.

“If you love something so much and it’s your childhood dream, that’s the biggest incentive you have to overcome any challenges quickly,” she said. 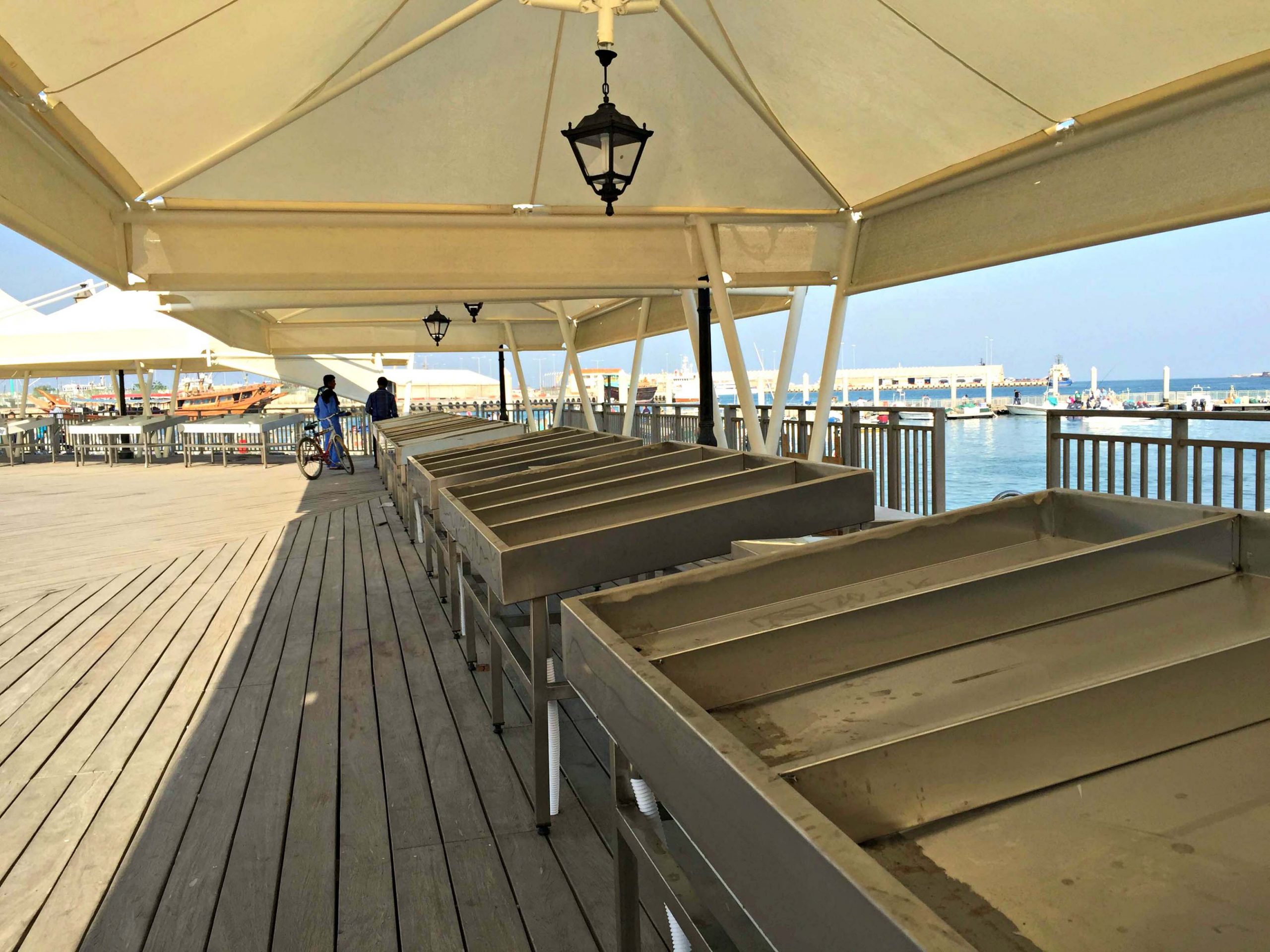 Renovated fish market on the Corniche to open Jan. 1, 2015

Good on her, I wonder what makes fellowmhumans stoop to such a low level to try and stop a girl persuing her dreams.

It’s good to see they failed and she is inspiring others to follow in her footsteps.

Sousou! Hope there’s a follow up in April, now you’ve opened a can of worms though, who are the other two vets, why not feature them alongside

i think one of the two vets not mentioned is dr. abdullah of parkview pet center 🙂

Abdullah? A vet? He owns Parkview, but isn’t a vet, unless they’ve hired one also called Abdullah.

Great woman. May she succeed.

Very nice and interesting story. All the best to Dr. Muneera

Brava, Dr Muneera!
There are taboos “associated with caring for animals”? Well, that explains a lot, and good on you for challenging them. Changing the world, one person at a time.

Hats off to Dr. Muneera. You are doing a wonderful job. I salute you.

She is a great example! It is thanks to people like her that a society can evolve.

As quoted: “They are often astonished when she comes to their aid, she said, often asking, “Are you absolutely positive you’re a Qatari female vet?”

Ahhh…. the wonders of education! Congratulations Dr. Muneera Al Fadala. You are an inspiration to all women in the GCC.

Congrats on her achievement… however, if she has such a love of animals, why does she ask people to move their dogs out of the way before she passes by them?

“However, women still have a ways to go here.”

Good job, Dr. Muneera. May Allah bless you with your career.

By the way, Is there anyone knows that Ministry affiliated clinics giving free treatments and vaccinations to animals? I am a cat lover and I need to know more about vet services in Qatar.
Thank you.

yayyyy im so happy reading motivational and awesome stories like this, we need more women like Dr. Muneera Al Fadala :-), wishing her the best 🙂

She is very sensitive and very helpful! She deserves the best.