Once upon a time — and not all that long ago — this meeting would have been unthinkable.

But the Sisi regime’s positions on Qatar went beyond a mere political difference over the Arab Spring. Importantly, Egypt’s military regime also accused the Qatari state of a host of crimes.

Not long after the coup, Egypt publicly accused Qatar of supporting terrorism, including a spate of attacks in the Sinai Peninsula targeting the Egyptian military, and the twin Palm Sunday terror attacks that killed more than 40 Egyptian Christians.

The accusations were baseless — no evidence was ever put forward to suggest that Qatar supported terrorism — but they nonetheless resonated with pro-Sisi Egyptians.

In 2015, prominent pro-regime television host Ahmed Mousa said that Qatar was one of the “axis of evil” countries that “support terrorism.”

He also stated that “Qatar will pay the price” for crimes it committed in Egypt, and that Egypt “must teach Qatar… a lesson it will never forget.”

Later, in 2017, Mousa called on Egyptian residents of Qatar to initiate protests in the Gulf country that would cause the Sheikh Tamim government to “fall.”

In 2017, another prominent pro-regime media presenter, Nashaat Al-Deehy, said Qatar should pay $100 billion in compensation to Egypt over crimes of terrorism.

Al-Deehy added, “The Egyptians will only be satisfied when they see the shrouds of the Amir of Qatar. He should come crawling on his knees, carrying his shrouds in his hands, and beg the Egyptian people for their absolution and forgiveness.”

The Gulf state was also a primary subject in a prominent Egyptian espionage case involving former Egyptian president Mohamed Morsi, who was ousted in the 2013 coup and then accused by the Sisi regime of multiple crimes, including spying for Qatar.

Despite the completely farcical nature of the charges against Morsi, he was ultimately convicted and sentenced to 25 years in prison by Egypt’s politicised judiciary, which Sisi controls and uses as a tool of repression.

Several of the media outlet’s journalists remain jailed in Egypt.

Post-coup tensions culminated in the June 2017 decision — by Saudi Arabia, the United Arab Emirates, Bahrain, and Egypt — to impose a blockade against Qatar.

What, then, explains the current diplomatic rapprochement, marked most prominently by Sheikh Tamim’s June visit to Cairo and Sisi’s Tuesday visit to Doha?

How has it become possible for Sisi to make nice with a country that his regime has long accused of trying to destroy Egypt?

The End of the Blockade

Qatar arguably came out of the 2017-2021 blockade stronger than it entered it.

The small Gulf country was able to withstand diplomatic pressure while never giving in to any of the 13 demands issued by the blockading countries.

Overall, the blockade strengthened Qatar’s economy and helped it to establish manufacturing and agricultural self-sufficiency.

Forced to confront the reality that it was unable to bully Qatar into compromising its national sovereignty, the Saudi-led axis ultimately decided, in January 2021, to cut its losses and end the blockade.

The decision to end the blockade was made primarily by the Saudis and Emiratis, who financed Egypt’s post-coup transition and exerted considerable sway inside the blockading quartet of countries.

The Egyptian regime, and the government of Bahrain, merely complied.

With the blockade in the rearview mirror, it is politically expedient for both sides to engage in basic diplomatic cooperation, something which should naturally include high-level meetings between heads of state.

The end of the blockade, then, constitutes one important piece of context explaining Sisi’s about-face. But it does not offer the most compelling reason.

The other, more important explanation for Sisi’s shift is that the Egyptian regime is desperate for cash, and may have no choice but to ask wealthy neighbours for assistance.

Professor Robert Springborg argued recently that Egypt has become a “beggar state,” with borrowing money as its only discernible economic strategy.

Lavish, wasteful government spending, the expansion of Egyptian military dominance over the financial sector, and the combined effects of the coronavirus and the Russian-Ukrainian war, have wreaked havoc on the Egyptian economy.

Egypt is borrowing money just to pay interest on current debt, which is approaching $400 billion.

Egypt spends about one-third of its national budget on debt, which is projected to reach $557 billion by 2026.

There is some evidence that Egypt is already experiencing shortages.

The dramatic weakening of the Egyptian pound under Sisi has also contributed to high inflation, something which has caused ordinary Egyptians to struggle to make ends meet.

One consequence of deteriorating economic conditions has been an increase in poverty.

Today, approximately 30% of Egyptians live on less than $3.20 per day.

In a recent pep talk, Sisi reminded Egyptians that the Prophet Muhammad and his companions were forced to eat tree leaves during their own battles with poverty and hunger.

The government has also warned Egyptians against giving birth to too many children, and recently launched a campaign to limit children to two per family.

In a June press conference, Sisi called upon his “Arab brothers” — a clear reference to Gulf states — to help Egypt’s economy by injecting cash into it.

Despite getting on well during the blockade, the resumption of diplomacy has been beneficial for Qatar.

In the end, no nation wants to face diplomatic isolation, to say nothing of a full-on economic blockade.

Over the next several years, Qatar will likely save money on imports and see improvements to its banking and tourism sectors, among other benefits to the end of the blockade.

Tensions and disagreements between Egypt and Qatar will probably persist for some time. Egyptian media are likely to continue holding grudges against Qatar, and especially Al Jazeera, whilst the Qatari government will almost certainly continue to push Egypt to release the journalists from prison.

But the days of the blockade are over, and Egypt will continue to require Qatari economic assistance for years to come.

Given that relations inside the quartet of former blockading countries have strained — a fact that will dictate diverging foreign policies going forward — Egypt has all the justification and motivation it needs to continue to make peace with the state it once considered an enemy.

Mohamad Elmasry is an Associate Professor and Chair in the Media Studies programme at the Doha Institute for Graduate Studies. 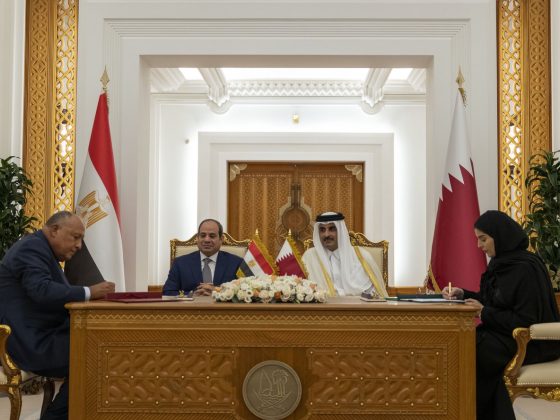