Scientists are warning that the 1.5C goal agreed upon last year is slipping out of reach, and the consequences of climate negligence are already being witnessed.

In three decades, the world’s coldest region— the Arctic— may be cleared of all ice during the summertime, leaving hundreds of species exposed and on the brink of extinction.

A recently released report by the United Nations claims that the Arctic sea ice will disappear completely by 2050, noting it has already started melting as the world stands in awe.

East Antarctica had rainfall in March of this year alone due to the extremely warm air temperatures. The Alps have also lost 5% of their ice cover over the summer.

According to a report by the research network of the International Cryosphere Climate Initiative (ICCI), Greenland also broke its previous record for melting in September.

There is mounting evidence that the world’s frozen regions are melting at rising rates – and much quicker than scientists had anticipated – following the planet’s eight warmest years on record.

It also highlighted “terminal diagnosis” for the ice that forms and floats atop the Arctic Ocean each summer, adding that they are beginning to see something that can’t be saved.

Another ‘useless’ call for action?

According to the UN Intergovernmental Panel on Climate Change (IPCC) summer sea ice will disappear even if global warming peaked at 1.6 degrees above the preindustrial normal. By 2100, the planet is expected to have warmed by 2.8 degrees.

Earlier this week, Antonio Guterres, the head of the United Nations, warned world leaders gathering in Egypt for the COP27 climate summit that mankind must choose between cooperating or committing “collective death” in the fight against global warming.

“Humanity has a choice: cooperate or perish,” Guterres said during the summit.

“It is either a climate solidarity pact or a collective suicide pact,” Guterres said, urging richer polluting nations to come to the aid of poorer countries least responsible for the emission of heat-trapping gases.

Nearly 100 heads of state and government are gathering in the Red Sea resort of Sharm el-Sheikh, where they are being urged to further reduce emissions and provide financial support to developing nations already suffering from the effects of global warming.

With tens of billions of dollars in damage and thousands of fatalities this year alone due to devastating floods in Nigeria and Pakistan, droughts in Kenya, Somalia, and the United States, and unheard-of heatwaves across three continents, nations around the world are dealing with increasingly severe natural disasters.

This time, it’s taking the lives of thousands around the world.

“We have seen one catastrophe after another,” said Egyptian President Abdel Fattah el-Sisi, whose country is hosting the annual gathering running until November 18 despite its own staggering human rights record.

“As soon as we tackle one catastrophe another one arises – wave after wave of suffering and loss,” he said, asking “Is it not high time to put an end to all this suffering?”

Environmentalists are among thousands of political prisoners in the North African country, and dozens of protestors were arrested in the lead-up to the summit. While Sisi puts on a ‘greener’ show for the camera, his regime jails those who push for it behind the scenes.

On the other hand, Guterres warned leaders that they must not put climate change on the “back burner”.

He urged countries to increase emissions in order to meet the more ambitious Paris Agreement target of 1.5 degrees Celsius (2.7 degrees Fahrenheit) over pre-industrial levels. He called for a “historic” agreement between wealthy polluters and rising economies.

By the end of the decade, current trends would result in a 10% rise in carbon pollution and a 2.8C increase in surface temperature (5F).

He observed that despite years of climate negotiations, progress has not been enough to prevent dangerous global warming because nations are moving too slowly or reluctantly.

“We are on a highway to climate hell with our foot still on the accelerator.”

The head of the UN requested that nations come to an agreement to phase out coal use, one of the highest carbon-intense fuels, by 2040. 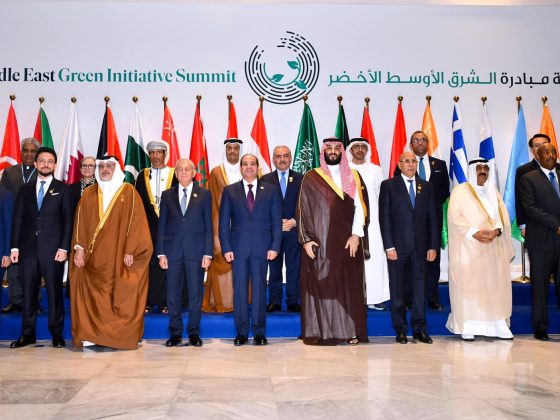