A one minute walk in the scorching summer heat from the car to the gate of a building feels like an impossible feat for many, especially with temperatures in Qatar piercing through the mid 40 degree celsius range.

While for the privileged this journey ends in some form of air conditioned indoor setting, delivery drivers on motorcycles are made to endure unbearable heat to deliver orders on a daily basis.

In Qatar, this struggle has been noticed in recent weeks, with concerns for the fate, health and safety of drivers being amplified by social media users across various platforms.

“Today we ordered lunch, and the poor driver was about to faint from the sun while asking us for water,” said one Twitter user, while others called for urgent action to provide an immediate solution.

In a social media poll, 83% of participating Doha News readers stated that they do not think enough is being done to protect drivers from the heat.

With the advancement of technology and widespread access to mobile phone devices, entrepreneurs across the country and wider region have jumped at the opportunity to develop apps to cater for customers with a knack for convenience.

Qatar has itself seen various apps emerge, prompting fierce competition between different brands on the roads of the Gulf state. The popularity of food delivery apps has continued to increase among locals, and such success was made apparent earlier this month when Qatari startup Snoonu announced its push into the Omani market.

With this, Snoonu was crowned as the first local startup to penetrate beyond Qatar’s borders by acquiring another company.

Kuwait’s Talabat – already a regional sensation – has long been an established household name in Qatar. Similarly, other hopeful competitors have sprouted up across the country in a bid to get a piece of the pie.

However, with such success comes demand – and like in any industry, this usually comes at a cost.

As per Qatari law, some workers are prohibited from working between 10am to 3:30pm between 1st June to 15 September to protect them from heat stress.

As temperatures near 50 degrees celsius, dozens of motorcycles can often be seen parked outside office buildings during lunch hours. Doha News reached out to some of the country’s biggest food delivery apps to amplify concerns from their own customers.

In statements to Doha News, Talabat, Snoonu and Rafeeq all claimed it is optional for their drivers to work between 10am to 3:30pm. All companies also confirmed the duration of shifts for their staff are eight hours long, as per Qatari law. For Rafeeq, this is taken a step further with established and set schedules.

However, a source at the Ministry of Labour told Doha News it is still illegal to give drivers the ‘option’.

“They have to take all the health measures required,” the source said.

A full-time driver from one of the delivery companies told Doha News that he has to work a daily 12 hour shift, from 7am to 7pm, with only two days off per month.

“After twelve hours in the street, I still have to go deposit cash, which takes another hour from my day,” said Fred*, a driver.

Even when given the choice, it is important to note that many of the drivers that work for the companies are not full time, and get paid per order. For this reason, many find themselves forced to work in harsh conditions to make a liveable wage.

“Not enough orders at night. I came to Qatar to make money for my family. I don’t make enough money if I don’t work in the morning, so I force myself every morning to be strong,” said James, an alias.

In a statement to Doha News, Talabat said the safety of it drivers was a top priority for the company.

“As part of our rider well-being programme, we have previously implemented flexi-break, which allows Talabat riders to take automatically approved breaks with the push of a button, allowing them to work at their own pace, and rest when they need to,” the statement said.

“Most Talabat riders work 8 hours per day, of which 40% is spent indoors. With the flexible work environment that we offer, some Talabat riders may choose to take additional shifts throughout the year, however during the summer months, we encourage Talabat riders to choose their shift patterns wisely.”

The Kuwait-based company, which operates in 9 countries around the Middle East, assured a set of regulations are already in place to protect their staff.

The food delivery app – the biggest in the region – said it provides drivers with ‘summer kits’, which include a specifically designed cooling vest and a thermo water bottle, designed to keep water cold throughout the day.

“It’s not enough, but we manage,” one Talabat driver told Doha News.

To take it a step further, Talabat also has agreements in place with a number of vendors that use its services, in which cool waiting areas are provided to drivers while awaiting food pick ups.

This is meant to ensure that riders can cool down and refill their water bottles at the pick-up location.

For those that don’t have shade, orders from malls come as a relief.

“I feel happy when I pick up [an] order from Doha Festival City because I [can] sit inside and feel air,” Muhammed, another driver, said.

Talabat said it also provides different rest stops where drivers can take a break. The rest stops are in buses that are specifically designed for the drivers.

Local Qatari startup Snoonu detailed ways in which it attempts to aid its drivers. The company made headlines last year after unveiling its “no riders under the sun” campaign, drawing praise from the public.

The startup says it provides its riders with ‘cooling areas’ in 11 locations scattered across the country, where they can go to rest, hydrate, and cool down from the outside heat.

In a statement to Doha News, Snoonu said that currently, 60% of their fleet consists of cars.

“As Snoonu, we will always do our best to support our superheroes. The heat during summer is tough, we acknowledge that driving for bikers might be dangerous, and they must have a place where they can stay to take a break anytime they want.

“We have allocated chill places for bike drivers all around Qatar, each place is cool, equipped with fridges for soft drinks and snacks. Everything is free of charge, bikers can stay as long as they want as well, we welcome not just Snoonu riders but the whole delivery bikers community in Qatar. Everyone deserves a break and a safe space,” the company said.

While the majority of its fleet consists of cars, Snoonu said riders have the choice.

“As for the motorcycle drivers, we give them the option that if they don’t want to ride they don’t have to. We improved the algorithm so now it will make sure that only short-distance orders will go to the bikes, while the longer distance ones go to the car,” they added.

Additionally, Snoonu stated that they are planning to invest into robots in the future, called ‘Rover’, so that drivers don’t have to be under the sun in any capacity.

Similar moves have been made by competitor, Rafeeq, which assured all “drivers are well informed that they have an option to request for their shift change.

“A lot of drivers have changed their shifts recently and this option is also available during non-summer months,” a statement to Doha News said, noting the company’s fleet consists of 45% cars and 55% bikes.

The Qatari company said it has also taken initiative to communicate with some vendors who have “availability [in space] for the drivers” to wait inside, instead of in the summer heat.

While the steps taken by companies do offer some relief, some social media users think more should be done.

Among the suggestions made is equipping drivers with air conditioned helmets.

“Instead of investing thousands if not millions in influencers and celebrities, the companies should be putting their drivers first,” one reader told Doha News.

The responsibility of restaurants

While the delivery companies seem to have taken much of the blame, others pointed towards the role of local restaurants in the ongoing issue.

All drivers who spoke to Doha News expressed that a common concern and issue is the lack of empathy from restaurants, many of which ask them to wait outside until the order is ready, even during the day.

“No humanity, the driver [is] also human, why [is] he not waiting inside? He’s also like [a] customer, he’s taking your order,” added Muhammed.

This violates the rule of the Ministry of Labour which require restaurants to provide drivers with an air-conditioned, shaded waiting area and give them water to cool off, the source said.

Those who are not provided with adequate services should file a complaint to the ministry, the source added.

The issue also extends to customers themselves, with numerous drivers saying it is rare for them to receive tips.

“Customer they don’t tip, even if one riyal change, they wait for me to give to them. Once customer made me go to the supermarket to get two riyal change because I don’t have,” said Muhammed, who noted a little can go a long way.

For those who choose not to tip, or cannot afford to, the drivers say water could lessen the struggle. 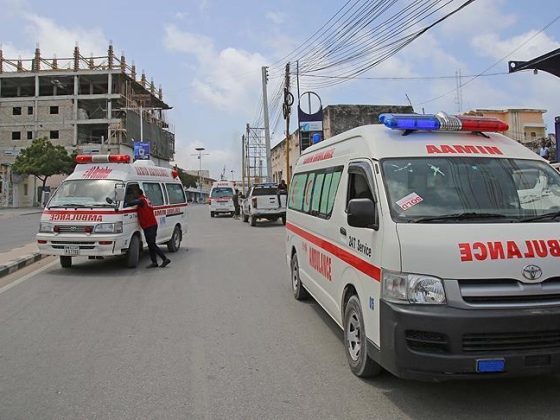