The latest Israeli aggression was described as “ethnic cleansing” by Qatar’s Deputy Foreign Minister at the Arab League meeting.

Dozens of residents in Qatar took to the streets on Tuesday as part of a car convoy to show solidarity with Palestinians facing Israeli aggression.

Dozens of residents in Qatar took to the streets on Tuesday as part of a car convoy to show solidarity with #Palestinians facing Israeli aggression. #فلسطسن pic.twitter.com/HlC3vZrdKn

Several people were seen holding Palestinian flags and wearing Keffiyehs as a show of solidarity to the Palestinian cause, driving around Katara, The Pearl and along the corniche on Tuesday.

Sources who spoke to Doha News said the convoy was pre-organised by social media users to stand against recent escalations by Israeli forces in Jerusalem and Gaza that led to dozens of deaths, including at least 9 children, in recent days.

Also in Doha, buildings belonging to Qatar Museums were lit up in red on Monday evening to stand with Palestinians.

The National Museum of Qatar and the Museum of Islamic Art were pictured glowing in red “to show solidarity with Palestinians people being forced out of their homes in East Jerusalem,” QM said on Instagram.

Qatari officials also pledged Doha’s support to the Palestinian cause and condemned ongoing violence taking place at the Al-Aqsa mosque, Jerusalem and other areas.

At an Arab League meeting on Tuesday, Qatar’s Deputy Prime Minister and Minister of Foreign Affairs Mohammed bin Abdulrahman Al-Thani urged members of the league to unite in efforts and actively move to support the Palestinian people and end Israeli aggression.

“I hope that there will be a unified decision by the member states, with a broad move in international forums in order to support the brotherly Palestinian people,” Sheikh Mohammed said during an emergency virtual session with Arab foreign ministers.

The official also went on to describe moves by extremist Jewish settlers to forcibly expel Palestinians from their historic homes in the Sheikh Jarrah neighbourhood as ethnic cleansing, The Peninsula reported.

“The Jewish settlers have confessed in front of the cameras to stealing Palestinian homes under the eyes of the Israeli occupation forces. The issue is not an individual ownership of some houses in the Sheikh Jarrah neighbourhood, but rather a link within a scheme implemented by the settlement associations,” the Qatari official said.

“The settler associations consider what they do in the Arab neighbourhoods as a religious duty to uproot the Arabs and replace them,” he added.

The move came as Israeli air strikes killed more than 28 Palestinians, 9 of which were children, in the besieged Gaza Strip, described as the world’s largest open air prison. Most of the children belonged to the same family or were related.

More than 100 were wounded as Israeli aggression continued into the early hours of Tuesday, Gaza’s health ministry said.

Back in Jerusalem, a massive fire broke out on Monday evening in the courtyard of the Al Aqsa compound as large crows of Israeli settlers were filmed celebrating.

Israeli forces used rubber-coated steel rounds, stun grenades, and tear gas to attack Palestinians at the Al Aqsa compound as it carried out a raid for days in a row. Harrowing videos that emerged online showed worshippers at the mosque facing tear gas inside the mosque.

Hundreds of Palestinians have been injured in brute force attacks by Israeli police in Jerusalem and across the West Bank in the past few days. 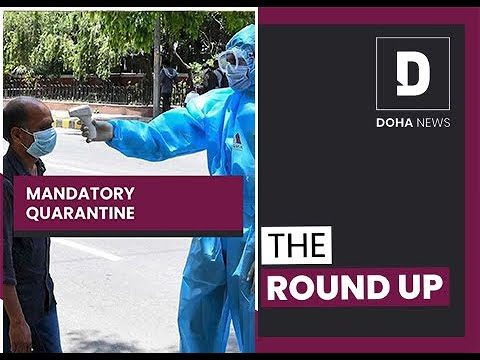