The Happy Planet Index, a measure of well being and environmental impact worldwide, has released its latest finding, setting Qatar very close to the bottom.

Beating out only Chad and Botswana in 2012, Qatar was given a rank of 149 of 151 for its ecological footprint – considered the worst in the world.

The index was founded by the New Economics Foundation (NEF) in 2006 and is produced every three years. Its creator, Nic Marks, says the HPI measures “what really matters — long and happy lives now and the potential for good lives in the future.”

If everyone had the same Ecological Footprint as the average citizen of Qatar:

• the world’s Ecological Footprint would be four times larger

• we would need to reduce our Ecological Footprints by a factor of 6.6 in order to stay within sustainable environmental limits

Qatari authorities, meanwhile, emphasized recently at the COP 18 UN Climate Change Conference held in Doha, that its poor carbon footprint is not due to individual consumption so much as high levels of industry compared to its small population.

Similarly, the small European country of Luxembourg ranked 138 out of 151 for its high environmental footprint as compared to life expectancy and well being levels.

Topping this edition of the HPI are Costa Rica, Vietnam and Colombia.

Earlier this year, the United Nations launched its first “World Happiness Report,” ranking Qatar as the 29th happiest country. A Misery Index by the Economist at the beginning of 2012 also named Qatar the “least miserable” place to live in the world, given the low levels of unemployment and inflation here.

Credit: Photo by Pedronet. Hat tip to Jason for sharing the link. 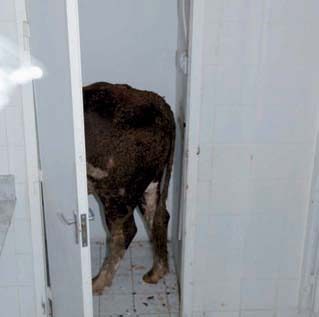 Qatar to investigate escape of cattle that injured three, ran amok for hours