There’s a lot at stake, which is continually pushing Qatar to add more and more muscle to its security measures. The eruption of opposition to Qatar hosting this great event ever since it won the bid in December, 2010, is also a concern, prompting the country to form alliances to ensure safe passage of the tournament.

Since this would be the first-of-its-kind experience for Qatar, it has formed association with various security agencies to derive the necessary knowledge and expertise, such as the International Police Organisation (Interpol) and the International Centre for Sport Security (ICSS). The aim of these associations is to understand the security and safety implications, as well as sharing the record of possible threats so that proactive measures can be installed to tackle them.

The latest alliance is with the North Atlantic Treaty Organization (NATO).

The Emir of Qatar, HH Sheikh Tamim bin Hamad al Thani, and the Secretary-General of NATO, Jens Stoltenberg, on Wednesday signed the agreement on military and security cooperation and also discussed various challenges facing the region and the world as a whole, along with the promotion of international peace and security. This will play a major role in achieving Qatar’s objective of ensuring regional peace and security, which is critical to the success of the FIFA World Cup 2022.

Qatar’s objective of beefing up security also has a historical context to it, with the threat of terror being almost as critical as the actual attacks themselves.

Blasts from the past

The Olympics experienced its darkest day during the 1972 Munich Games. The Palestinian militant group, Black September, took the Israeli national team hostage, in the end butchering eleven athletes and coaches, along with a German police officer after a 16-hour clash. 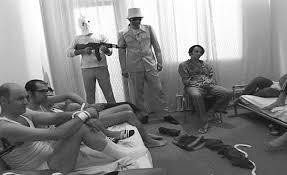 Ahead of the Beijing Games, China deployed a considerable security presence, claiming it had thwarted a terrorist hijacking plot. It warned it faced further threats in its Muslim-majority northwest. Five days prior to the lighting up of the flames, there was an attack by Muslim separatists in the city of Kashgar in China’s far western Xinjiang region, which left 16 policemen dead and an equal number severely injured.

In late 2015, Paris was hit by a series of attacks. It all started outside the national football stadium in Saint Denis and ended with the infamous standoff at the Bataclan Theatre. In December 2016, a football stadium in Istanbul was witness to a horrific car explosion. And in April, 2017, the team bus of Borussia Dortmund faced a series of controlled explosions just as it left the team hotel, injuring one player… Qatar To Upgrade Child Rights Legislation As Per International Standards