It all started in February, when revolution hit Libya, and the battle to oust embattled leader Muammar al-Qaddafi took new life.

Even then, Qatar was among the first countries to denounce Qaddafi’s harsh response to protesters. Qaddafi’s son in turn had a few harsh words for Qatar.

Since then, Qatar has:

Last year, at a regional summit, Qaddafi made a crude joke about the bulky Qatari leader being “better than me at filling a void” and cackled maniacally afterwards, to the obvious embarrassment of the Libyan diplomats around him.

On Monday, Qatar became the first Arab state to recognize the NTC as the “sole legitimate representative of the Libyan people.” With the allied bombing taking a punishing toll and with Qaddafi down to his few remaining strongholds, and Libya TV about to launch, it seems the emir is getting the last laugh. 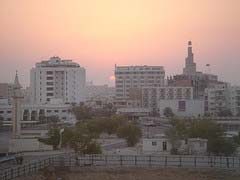