More than 100 Palestinian teachers who left Gaza to interview for jobs in Qatar were sent home last night after Jordanian authorities denied them access through the Allenby border crossing, also known as the King Hussein Bridge.

According to the Palestinian ambassador in Doha, the teachers had been scheduled to interview for jobs with a Qatar education committee in Amman.

The travelers were turned back from Jordan’s border because the procedures to obtain official approval for their entry had not been completed, Mounir Ghannam told Doha News.

He added that the paperwork should be sorted soon.

After reaching the West Bank through the Erez crossing, most of the teachers were cleared to cross the Israeli side of the Allenby border because they had the necessary official documents and approvals from those authorities.

However, Israeli officials refused entry to some of the teachers over what they described as “security concerns,” Ghannam said.

The rest of the educators were then denied access to the Allenby crossing from the Jordanian side, due to a lack of official clearance.

Teachers who are hired by the education council will receive work visas to start teaching in Qatar at the beginning of upcoming academic school year in September.

The process is part of Qatar’s Palestinian employment initiative, which the country launched last year.

Under that program, employment visas from Qatar would allow those holding Palestinian identification documents –  not passports – to work here.

If successful, the initiative would roughly double the size of the Palestinian population in Qatar to 40,000, Ghannam previously told Doha News.

He added that such job opportunities would provide much-needed work for residents of the occupied territories. Gaza has the highest unemployment rate in the world at 43 percent, according to the World Bank.

Over the past several years, Qatar has sent millions of dollars of financial support to the Palestinian Authority. In April, it offered the government some $100 million in interest-free loans to be allocated for developmental projects.

And in 2013, it committed $150 million to help the state pay its bills, as well as several hundred million dollars to help construct a new Palestinian town in the West Bank.

Diplomatically, former Qatari Emir Sheikh Hamad bin Khalifa Al Thani was a strong supporter of the Palestinian people and made a landmark visit to Gaza in 2012. 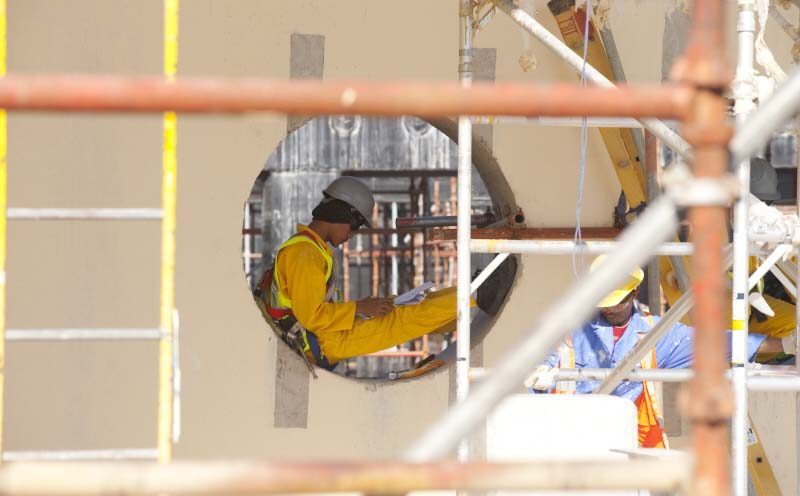 Haha and so it begins….. Deeds not matching the words and I cannot believe Qatar will double the number of Palestinians here as they know once they come they will never leave and they cannot send them “home”

Here comes the troll. If you you got nothing good to say why don’t you keep your stinkin opinion to yourself.

First a story on 200,000 Pakistanis a coming to Qatar and now 20,000 Palestinians. Never going to happen despite what the Arab ‘brothers’ say in public.

Qatar is the only ‘Arab brother’ which is actually lending aid to Palestine. Palestine’s other ‘Arab brothers’ have been completely useless in terms of so-called ‘foreign aid’ to the country’s deprived and oppressed population.

Are you kidding me. Instead of deleting the comment of this full time troll which is replete with inaccurate information and full of slander.
And where in the world was it a personal attack.

Please state the inaccurate information and the examples of slander. (In fact it would actually be libel not slander if proved)

What’s this got to do with Qatar? It is Jordan who wouldn’t let them cross.

I think it is Qatar’s fault. There are still some paperworks and permits to sort out with Jordan and apparently Qatar’s embassy there did not do a good job.

Okay, if you say so. Interesting to know that the Israeli border guards have lower standards for paperwork than the Jordanians.

Jordan wants to make sure the Palestinians don’t stay in Jordan and are truly going to Qatar as they say. They have had enough problems with Palestinians and don’t want more.

MIMH,
Please understand facts, before posting any non sense,
a) Fact # 1 : If you ever been to AMMAN Jordan, You will notice that it was and still is the noble and hardworking minded people of Palestine, the made it a vibrant and enterprising economy with their hard work there
b) Fact # 2 : More details needs to be on facts needs to come and it is more than what actually meets the eyes.
c) Please never see people migration as an liability, there is a saying that it is “Man that can covert a land into gold or dust”, they will come here and only bring positive change.
d) Even after the illegal occupation , they have educated themselves and are now Teachers and professors, this itself is a testimony, they will risen against all odds.

My message to you is , is it too much to ask for, for every individual to give these heroes respect, warmth and heartfelt welcome , where they are not only deprived of Land, but even no Passports, where they can call a county of their own. Sometime we take for granted in these modern times, that a country and passport is a basic rights and that’s a no brain er, but remember when they have witnessed first hand devastation , on their homes , schools and hospitals , yet they stand tall I am myself stunned .

that’s the palestinian version of things you are saying.

Fact # 3 The arab ‘brothers’ don’t want to integrate palestinians into their societies and hence they keep alive the concept of a ‘palestine state’.

I don’t see migration as a liability, I think people should be free to go wherever, however Jordan is against it and Qatar certainly is. If Qatar wanted to help Palestinians it would give citizenship to those that have been here for generations, but no they keep the, stateless. They can’t live a normal life in Qatar and they can’t go home because of Israel, so they live their lives in perpetual limbo and this before I get to the discrimination that Palestinians suffer in Qatar.

I have enormous sympathy for the Palestinians and their intolerable situation but just because some gulf states give them money doesn’t mean they are helping. It’s just for political consumption and the sore of palestinian suffering is used by gulf states in their never ending war against Israel. The lives of people played with for their own politics.

While we are n the subject. Biggest donor to Palestine? The U.S. Go figure.

Where are Palestinians happiest? The U.S., Canada and Europe where they get citizenship and can live normal lives, buy a house, get a car, watch a big TV and travel freely. Let’s see Qatar match that, you know they won’t as they don’t want 20,000 Palestinians.

Mate MIMH,
Ignorance is a bliss,
Let me give you a straight forward and real example of life,
a) whenever there is economical interest at stake, ethics take a back foot, so for eg: if you are right , you are wrong, and the wrong doers are the right ones
b) How did i figure this out : From the countries that you mentioned, you have a paradise place called “Ghettos” where most of these immigrants are stationed. Please google and see how much of happiness and prosperity goes in there. Just providing a few human amenities made a crack addicted mayor stick to power.
c)Granting citizenship , even the super power i would not like to take names have race mentioned on their Passports ,so lets not get to that part of the argument, no one likes to be a second or third class citizen, may be a few who have risen above hate and prejudice are the happiest ones from an economic point of view.
d) Well keeping a country in a drip system AKA Aid or charity is not the best way forward,teach and empower people to be sustainable, and that can be done in a FREEDOM, and State constitution. un fortunately none of that may ever come by
e) Please stop watching a lot of political connected news channel and do some research and analysis you will see the real picture

and to answer another commentator on which version i am saying :
please read my a comment and analyse how much more billion dollars, if not trillion of State subsidy will have to be incurred.

Wow your a bitter person. No the ghettos for the Palestinians are the ones in Lebanon, Egypt, Jordan and the gulf states. They are kept permanent refugees.

You have ruined the post in the last para.

Yes, I guess MIMH is right on this occasion, the Israelis, on contrary aren’t bothering Palestinians going OUT of the country.

I thought you were warned by Shabina.

Warned over telling the truth? If I’m banned for that then so be it

I’m not even sure you know the meaning of the word truth. And by not even sure, I mean definitely. What you’re confusing this for is opinion through conscious and subconscious perception. The more reflective, ie. those with actual knowledge and intelligence, will be able to realise those subjectivities and how they affect their opinion and their view of the ”truth”. So, no, you wouldn’t be banned over telling the truth, you’d be banned for not realising how subjective and imposing you’re comments are, think Bush 2001, with me or against me, truth is wmds and the likers of your material is the coalition of the willing

Sorry but you’re unbearable . You always have something useless and negative to say. And you know what ! the most futile thing you ever wrote was this ” (Great pictures very well taken. Mosques look great on the outside but somewhat lack character on the inside compared to old churches or temples around the world) . why do you have to compare churches and mosques anyway! controversy that’s what you’re looking for in this blog you comment on every single article! You’re addicted dear try doing some other activities try cycling or hiking I’m sure you can manage to get rid of all your negative energy doing sports instead of commenting on Doha news

You know what, that is fine. You are entitled to your opinion and I respect you for it.

Not sure why the interviews would be conducted in Jordan. If you want Palestinians, why not go to the source, in Palestine? Also, would like to know where the Palestinians are earning their education degrees and how the education system in Palestine ranks in world standings.

Even if they interviewed in Gaza, the same problem might still happen those trying to reach Doha after getting hired. And Qatar can’t always help with that. I doubt this employment program guarantees constant, full cooperation from other governments. As long as there is no direct route between Gaza and Doha they will be at the mercy of other countries’ border control policies in this process.

In case you did not know — people travel to and from Gaza through designated points, and these points give you limited options in your travel route. Hence the stop in Jordan. On top of that it can be a guessing game at the check points. Some people are allowed to cross, and some are turned back.
It’s possible that the committee waited in Amman hoping that at least some candidates would cross. This would allow them to immediately transfer the ones who get hired to Doha.

On the other news, Israeli revenge-seeking ‘settlers’ attacked home and killed 18 months old Palestinian toddler. How many more thousands of years we are going to deny humanity to the people of this region? :’-(

Yep utter [email protected] Israel is as bad as most Arab regimes when it comes to human rights.

Jordan needs to take in all its own — the Arabs in Aza, Judea and Samaria.