A fire has erupted at the Msheireb Project construction site near Souq Waqif this evening, making it at least the fourth fire-related incident this week.

According to Msheireb Properties on Twitter, the fire originated in a private storage area:

On Twitter, Qatar’s Ministry of Interior (MOI) said the fire spread to multiple floors of the site but has now been contained. Officials are in the process of cooling down the site now.

So far, there are no reported injuries.

Earlier, the Ministry of Interior said workers had been evacuated from the scene – near Souq Waqif – and firefighters were working to contain the blaze, which began before 7pm.

Fire at under-construction Msheireb Downtown project nearby Souq Waqif. firefighters at the site. Details will be updated soon.

MOI asked those driving near the site to take a different route, as traffic congestion is building. Eyewitnesses said thick black smoke could be seen as far as C-Ring Road.

Msheireb is at least the third major site to experience a fire-related incident this week. On Wednesday, Civil Defense officials battled a fire in the underground parking lot of under-construction Sidra Medical and Research Center for hours. Later that day, Villaggio Mall was evacuated due to an electrical malfunction in a clothing store’s air conditioning unit.

Late Friday night, another fire-related incident took place at Villaggio, the mall where 19 people were killed in a fire last May. This time, cinema-goers were affected after a popcorn machine malfunctioned and caught fire, causing the corridors outside the movie theaters to become smokey. 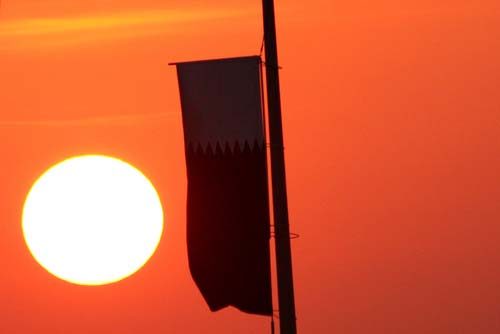 MET: Heat wave heading to Qatar this weekend, with temps climbing to 40C