Contractors involved in the World Cup refurbishment of Khalifa International Stadium violated the human rights of more than 100 expats by confiscating their passports, delaying salary payments and using threats to force them to keep working, Amnesty International has said.

The organization’s latest report on migrant labor in Qatar, The Ugly Side to the Beautiful Game, is the first in-depth study to specifically focus on the living and working conditions of the men building the stadiums for the 2022 World Cup.

More than half worked at the stadium and 99 worked on the green spaces in the surrounding Aspire sports complex, a related but unofficial World Cup project.

Several expats told researchers they were threatened with non-payment of wages, deportation or denial of an exit permit. The organization quoted one worker as saying:

“I went to the company office, telling the manager I wanted to go (back to my country) because always my pay is late. The manager screamed at me saying, ‘Keep working or you will never leave!’”

Another man hired to work on the Khalifa Stadium project told Amnesty: “I am an electrician and I agreed to electrician work, but when I came to Qatar they gave me electrician work for only the first two months. After that they said I had to do iron fitting work.”

The man apparently said that when he complained, a manager said, “Work for another one to three months and accept whatever you get. If you don’t work, you won’t get paid and you won’t get your passport back.”

Amnesty also spoke to more than a half-dozen Nepali men who said they were denied permission to return home to check on their family members following a major earthquake last year.

In its report, Amnesty said the Supreme Committee for Delivery and Legacy (SCDL), which is overseeing construction of stadiums and training facilities for the tournament, has “demonstrated a consistent commitment to ensuring the rights of workers on World Cup sites are respected and protected.”

But it is highly critical of the government itself for failing to abolish the kafala sponsorship system, which it said enables unscrupulous employers to abuse expats.

In its latest report, the rights group also lambasted FIFA for not pushing Qatar enough to improve its human rights record.

In terms of how it treats its workforce, SCDL contractors are required to go above and beyond what’s required by Qatar law, according to worker welfare standards set by the committee.

However, Amnesty argued that several smaller labor supply companies, as well as at least one subcontractor, failed to follow those standards between February 2015 and February 2016, when the organization conducted its research.

The human rights organization is also critical of the SCDL’s reliance on self-audits by contractors to detect and prevent abuses in their labor supply chains.

In response to Amnesty’s report, SCDL officials conceded that there were “challenges in worker conditions” that existed in early 2015, but argued that the assertions “paint a misleading picture.”

They said they banned several companies that don’t follow worker welfare rules from their projects, which shows that its own inspection program is capable of catching abuse.

The organization has also added additional layers of inspections – such as hiring a labor auditing firm, UK-based Impactt Ltd., which starts work April 1 – and addressed many of the concerns Amnesty raised in its report even before it was aware the human rights organization was conducting an investigation.

“There is a commitment towards progress,” SCDL secretary-general Hassan Al Thawadi said at a press conference earlier this week. “This World Cup is a catalyst for positive change.”

He added that the organization was “vindicated” after Amnesty found no evidence of any work-related deaths on World Cup sites, as the SCDL has said itself.

But focusing on this fact is “the wrong approach,” Amnesty researcher Mustafa Qadri told Doha News.

“No one should be saying, ‘Amnesty has found no deaths and it’s not a problem,’” he said. “Their system is not working as well as it could.”

For its part, Qatar’s government communications office has released as statement saying efforts to improve labor rights “are a work-in-progress.”

“Though many of the points raised by Amnesty have already been addressed through recent legislative changes, we are concerned by a number of allegations contained within the report.

The Ministry of Administrative Development, Labour and Social Affairs intends to investigate the contractors named in the report.”

“We are fully aware of the risks facing construction workers in Qatar and we are confident that the measures taken by the Supreme Committee for Delivery and Legacy are the appropriate ones and have already improved the situation for migrant workers working on FIFA World Cup construction sites,” saidFederico Addiechi, FIFA Head of Sustainability, in a statement.

One of the key problems, according to Amnesty and acknowledged by SCDL officials, is the difficulty in tracking all the companies that send employees to construction sites.

It is common industry practice to hire specialized firms for small jobs, as well as use manpower firms to supply temporary workers for labor-intensive periods of construction.

But according to experts, abuses are more likely to occur at smaller companies, which are typically on a given site for shorter periods, have informal employment arrangements with workers and can be in a financially precarious situation, which could cause them to cut corners if they start running out of work.

Amnesty said workers for Seven Hills and Blue Bay told its researchers that they had been subject to human rights abuses including deceptive recruitment practices, retention of passports, inadequate accommodation, delays in payments of salaries as well as failure to provide and renew residence permits.

Amnesty said it also found evidence of forced labor, and that managers of the labor supply companies used the threat of penalties to exact work from its expat employees.

Seven Hills general manager, K Chandrasekar, told Doha News that Amnesty’s allegations were “all false” and that the company’s 20-odd employees have their passports and are paid on time. Doha News was unable to reach Blue Bay for comment.

While the SCDL said its welfare standards covers all workers on its sites, not everyone knew these particular companies were sending their employees to Khalifa Stadium.

“We accept that our auditing system had shortcomings to capture those staff,” Nasser Al Khater, the SCDL’s assistant secretary-general, said. “That was a challenge that we recognize and are now addressing.”

The SCDL said neither Seven Hills or Blue Bay have worked on World Cup projects since June 2015 and are no longer eligible to work on future contracts until the firms demonstrate compliance with the organization’s standards.

Similarly, Eversendai – which did not immediately respond to a request for comment from Doha News – has also been banned from subsequent World Cup projects until it demonstrates sustainable improvements, the SCDL said.

Amnesty’s report calls for several changes, including substantial reforms to Qatar’s sponsorship system that go beyond what’s scheduled to come into effect this year.

Another suggestion included that the SCDL add new requirements to its worker welfare charter that mandate World Cup contractors give their employees exit permits and no-objection certificates that would allow them to change jobs.

Al Thawadi did not respond directly when asked if the SCDL would adopt this recommendation, but noted that the worker welfare standards have already been strengthened once and could be revised again in the future.

Of the 234 men Amnesty spoke to, none were in possession of their passports in June 2015.

However, the SCDL has since tightened its requirements to explicitly require each expat on World Cup projects to be in possession of his passport.

All but six of the 234 men told Amnesty researchers that their salaries in Qatar were lower than what they were promised in their home country.

Eradicating the problem of contract substitution and illegal recruitment fees on World Cup sites from Qatar is challenging because it often involves agents in other countries.

Additionally, SCDL officials have previously said many of the affected expats were hired for projects other than World Cup stadiums, but were assigned to the project after their employer won a contract.

There are currently 5,100 construction workers on Qatar’s six active stadium sites, according to the SCDL. That number is expected to reach 36,000 by 2018.

THE UGLY SIDE OF THE BEAUTIFUL GAME: EXPLOITATION OF MIGRANT WORKERS ON A QATAR 2022 WORLD CUP SITE 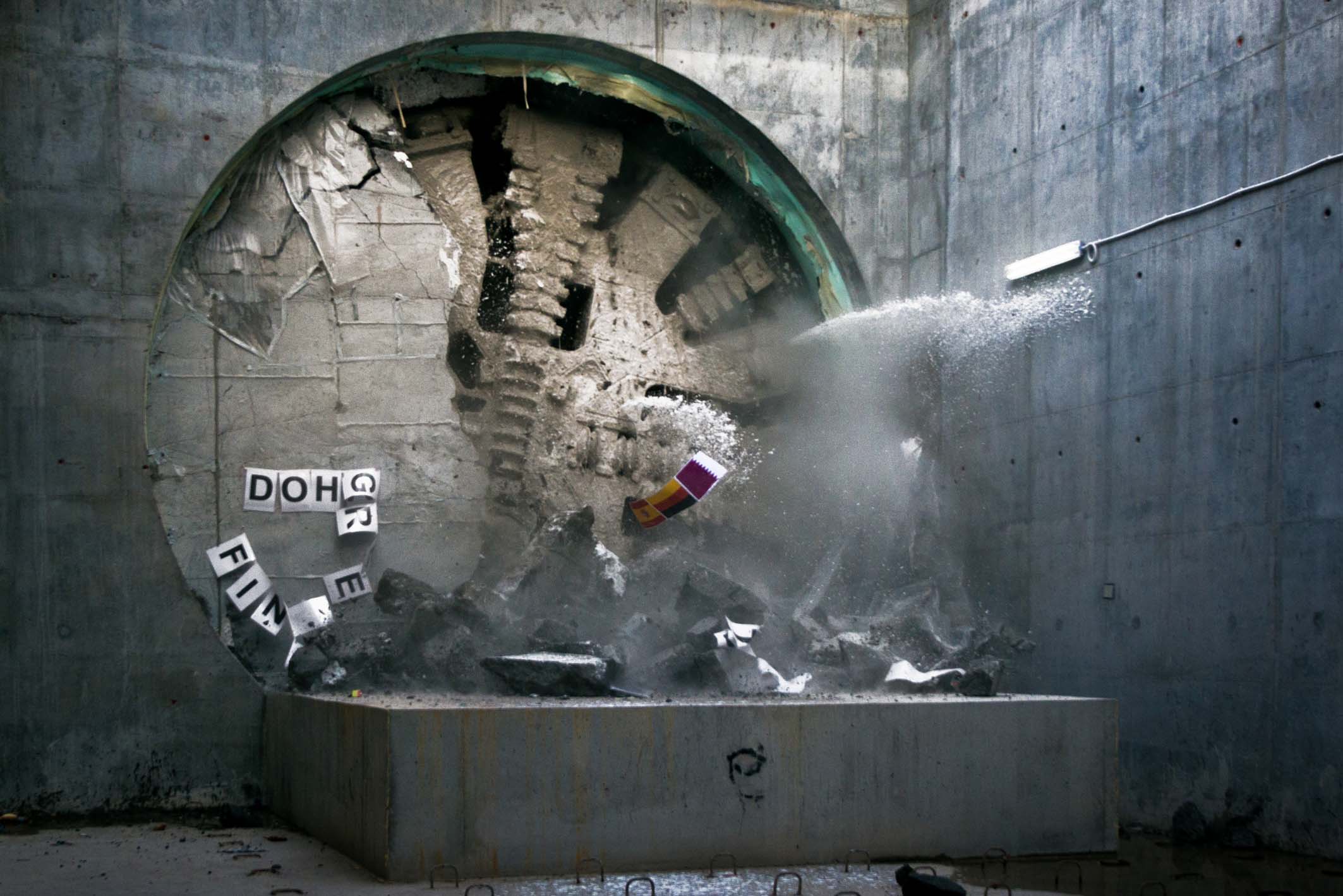