On 1st and 2nd November, Algeria hosted the 31st Ordinary Session of the Council of the League of Arab States, the first Arab Summit of its kind since the pandemic in 2019.

Following several postponements due to the Covid-19 pandemic, Algeria opted to host the Summit while celebrating the anniversary of its revolution against French colonialism in 1954.

The step was designed to display symbolic meaning.

A summit of ‘reunion’?

Algeria, the biggest Arab country in North Africa and the Arab world (area-wise), paved the way for this summit with a diplomatic breakthrough in the Palestinian issue resulting in a historic deal between the conflicting factions who were locked in an internal conflict for the last 15 years.

Algeria’s successful mediation effort between Hamas, Fatah, and 12 other Palestinian groups led to a reconciliation agreement that called for legislative and presidential elections within one year.

Algeria’s charm offensive on this front generated hope among the Arab public. Branding the Arab meeting as the summit of “reunion” further asserted the positive posture. Amid the summit, Algeria displayed unique diplomatic activism to project leadership.

However, not all Arab League members shared the same enthusiasm. Although all the Arab countries attended the summit except Syria, which has been suspended since 2011, several Arab leaders decided not to participate in person, including the leaders of Saudi Arabia, UAE, Bahrain, Kuwait, Oman, Morocco, and Jordan.

The absence of those leaders degraded the level of participation in the summit and its importance.

The summit hosted UN Secretary-General Antonio Guterres, Azerbaijan’s President Ilham Aliyev, the president of the Non-Aligned Movement, and president of Senegal Macky Sall, the current chairperson of the African Union, as guests of honour.

Notably, Russia’s President Putin was present at the summit through a letter that called on the Arab states to play a more significant role in advancing a multipolar world.

Algeria enjoys warm relations with Moscow and is considered one of its primary weapons importers.

A month ago, a bipartisan group of Congress members called on sanctioning Algeria under the Countering America’s Adversaries Sanctions Act. Although most Arab countries opted to show a neutral position in the Russian – Ukrainian conflict, some Arab countries were seen by different international actors as pro-Russia, such as Saudi Arabia, the UAE and Algeria.

Since the last summit in Tunisia, the Arab World has been facing a daring political, economic, social, and security situation. Algeria’s summit came against the backdrop of an increasing list of serious challenges facing the Arab World.

Inflation, unemployment, economic decline, corruption, political blockage and the re-emergence of authoritarianism amongst other issues currently dominate the region.

The Palestinian cause and food security topped the most critically discussed topics at the summit. The list included other issues such as the ongoing crisis in Syria, Yemen, and Libya, terrorism, the energy crisis, foreign interference and reforming the Arab League.

The concluded statement of the summit stressed the centrality of the Palestinian cause, upholding the 2000 Arab peace initiative as a strategic choice to end the Israeli occupation of all Arab lands and achieve peace.

It further stressed the continuation of the efforts to protect Jerusalem and its sacred places. In reality, however, the developments during the last few years, during which more Arab countries have normalised relations with Israel at the expense of the Palestinians, have run against this commitment.

This case uncovers the widening gap between the slogans and the deeds, as well as the division among the Arab countries concerning critical issues. The likely victory of Benjamin Netanyahu in the current Israeli elections and his re-emergence as a Prime Minister of Israel might further complicate the Palestinian issue in the coming period.

The final statement of Algeria’s summit called on pursuing a political resolution for the conflicts in Syria, Yemen, and Libya. Nevertheless, the Arab countries continue to have contradicting positions regarding each case.

Syria has been a source of conflict and division between the members states. Among other states, such as the UAE and Egypt, Algeria has been calling on the Arab countries to re-admit the Assad regime to the Arab league. Despite its paid effort on this front, the absence of consensus at this level blocked the attempts to re-admit Assad at the current moment.

Concerning Libya, despite the call for an internal resolution based on a Libyan-Libyan agreement, the interference in Libya’s internal affairs has continued, particularly from Egypt.

For years, Cairo supported warlord Khalifa Haftar to take over the power in Libya by military force before being defeated by the UN-recognised GNA in Tripoli in 2020 with the help of Turkey.

During the preparations for this Arab League Summit, a clash erupted between Egyptian officials and their Libyan counterparts in the background of Egypt’s position and its interference in the internal affairs of Libya.

The positions of Iran and Turkey reflected a division between member states of the Arab League who sought to condemn their interference in the internal affairs of Arab countries without clearly pointing to Iran and Turkey. Ironically, no one suggested condemning the interference of actors such as Russia.

Overall, despite Algeria’s effort to create a positive atmosphere, motivate the Arab states to do more in every aspect and promote a different picture for joint Arab action, this Arab Summit represented continuity rather than change.

The situation will likely remain the same until words turn into deeds. 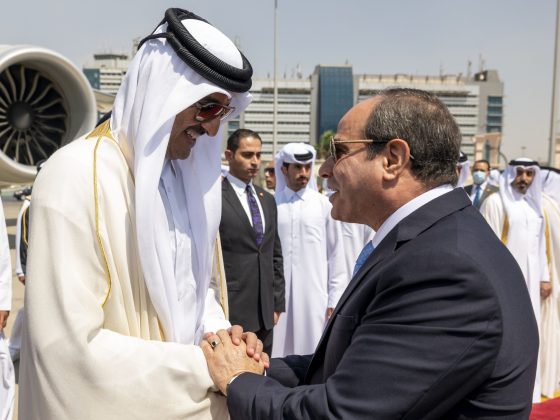