Qatar’s national carrier has said it would cease flying over Ukrainian territory until further notice, after a Malaysia Airlines plane traveling over eastern Ukraine was shot down yesterday, killing nearly 300 people.

MH17, a Boeing 777, had been traveling from Amsterdam to Kuala Lumpur, and was thought to have been hit by a missile from pro-Russian separatists in the area, though some rebel groups denied any involvement.

In a statement on its website, Qatar Airways said:

“The Qatar Airways Group is in deep dismay over the loss of flight MH17. We stand by to support our fellow oneworld alliance member during this sombre time.

In response to queries, Qatar Airways wishes to inform its passengers that select areas in Ukrainian air space are currently closed by authorities.

Qatar Airways will not fly over Ukrainian territory until further notice.”

Qatar Airways and other airlines such as Lufthansa have likely flown over the area in the recent past, as it’s a major commercial airway.

But the airline does not fly directly to Kiev, and said that it does not expect any delays to be caused by the route changes.

Meanwhile, Emirates Airline has suspended its flights to Ukraine and recalled its Kiev-bound Flight EK171 to Dubai yesterday over safety concerns.

Malaysian leadership and the families of the 298 people killed in last night’s crash have received an outpouring of support from the international community, including in Qatar.

NBC News reports that those killed include:

“154 citizens of the Netherlands; 43 from Malaysia, including 15 crew members and two infants; 27 from Australia; 12 from Indonesia, including one infant; 9 from the United Kingdom; 4 each from Germany and Belgium; 3 from the Philippines; and a citizen of Canada. The nationalities of 41 other victims have not yet been verified.”

According to QNA, both the Emir and Prime Minister extended their condolences to the king of Malaysia over the tragedy.

On behalf of Qatar Airways, our thoughts are with the relatives of those aboard Malaysia Airlines flight #MH17. We stand ready to assist

Doha residents have also reached out:

My deepest sympathies to the families of the passengers on flight #MH17.. I pity the situation that #MalaysiaAirlines is currently in..

An investigation is now underway into who shot the plane down, and what exactly happened. Five things to do in Qatar this weekend (May 8-10) I should hope QA, like every other airline, will be avoiding the conflict zone. It also makes me nervous when QA flies over the conflict zones in the Middle East. My worry is that it’s only a matter of time that a similar tragedy opens over those skies.

IATA deemed that bit of airspace to be safe. It would be strange if QA decides it’s not safe, when its CEO Akbar Al Baker is a member of IATA’s Board of Governors – a group who thought it was safe.

“According to its route map, Qatar Airways’ flights from Doha to Stockholm, Oslo, Warsaw and Copenhagen fly over Ukrainian airspace.”

That route map above in the article does not show actual routes. Those are hand drawn straight/curved lines from Doha to the destination just showing the general direction, drawn by a graphics artist at QR. Actual routes are not constant – they are calculated pre-flight by the Captain and FO in co-operation with QR’s flight dispatch department, taking into account weather, aircraft load, geopolitical stuff like overflying Iran etc etc…they are usually the same in the cruise section of the flight because they follow pre-defined ‘highways’ called airways once they reach cruise. They are mostly different every day in the arrival/departure sections, as changing weather and traffic density around the airport means aircraft will get different standard instrument departures (SID’s) and standard terminal arrival routes (STAR’s)

So those flights above may not necessarily overfly Ukraine, they only do on that map because the graphics artist drew nice straight lines from Doha to the destination.

p.s. Doha News, if you ever want an on-call aviation analyst hit me up. I will do it for two shwarama a week.

Polar flying is weird. You can’t draw a route going over the geographic north pole on a 2d map so you get a straight line along the top like that, which confuses the hell out of passengers when that image comes up on the IFE screens.

In reality you did this 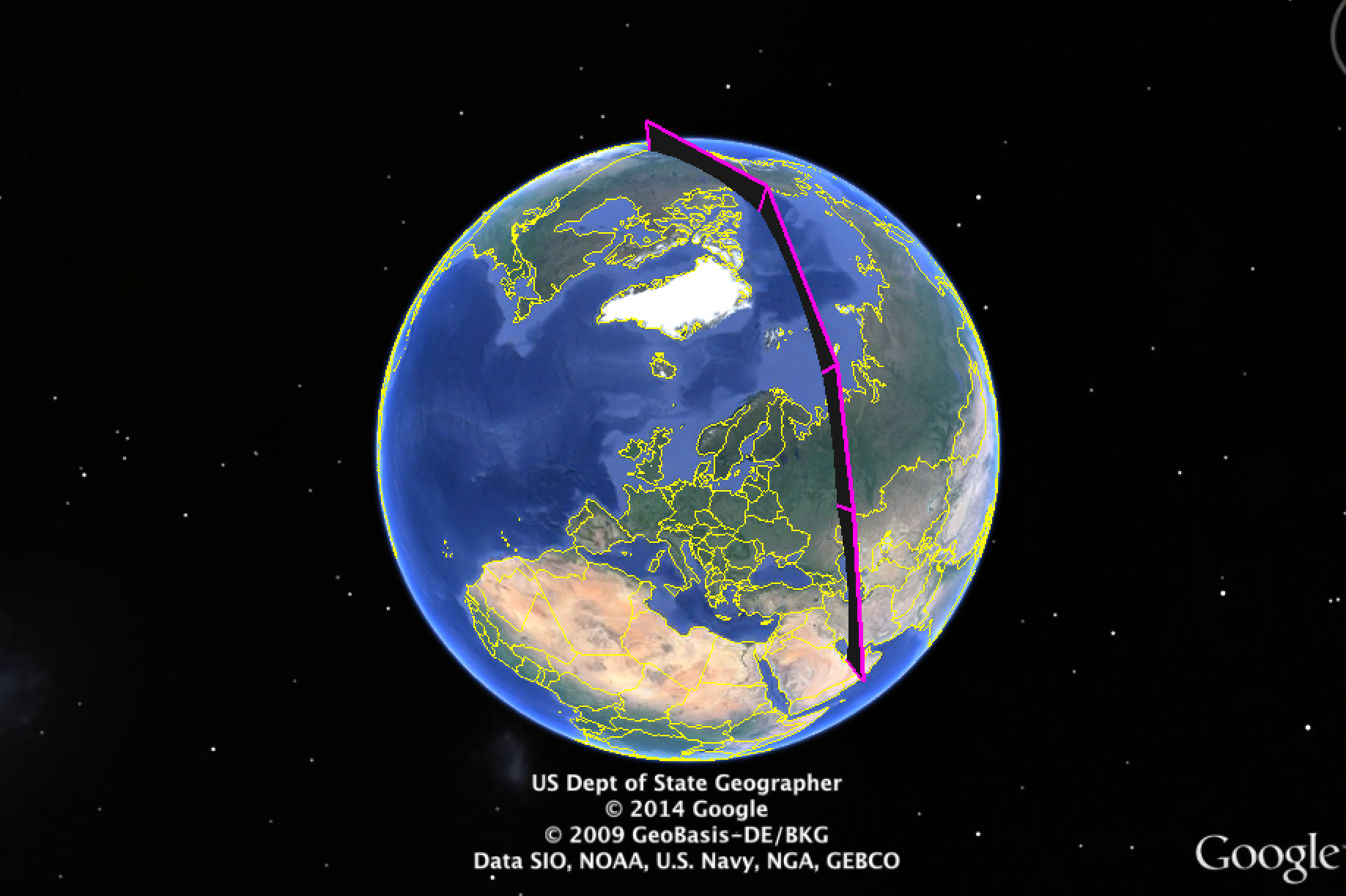 Good point 🙂 Will amend the story. And please do drop me an email – could always use aviation help! [email protected] (not com)

I’m hungry I’ll do it for one shwarma

Russia is finding out what happens when you give rebels advanced weaponry. These are not highly trained regular army, these are a bunch of opportunists being egged on by Putin. I find it funny many in the Middle East admire Putin, the man is a dangerous thug who runs a country for his personal mafia and uses a huge security apparatus to keep everyone in check.

The Russians should have learnt from Afghanistan when the Americans gave the afghans surface to air missiles to shoot downs their choppers and planes. Once you had them over you don’t know what will happen next…….

RIP to the innocent victims to Putin’s imperial ambitions.

My comment disappeared from this one as well. You need to change your disqus settings doha news and so one is trolling your columns.

Condolences to the families of the deceased.

So how many innocent people were killed in total on Thursday thanks to all these wars and disputes going on around the world? On top of the 298 on board that aircraft, there were also a significant number killed in ground fighting between the different factions, then add to this those killed in Syria, Iraq, Israel and Nigeria the same day.

It’s about time for the world and religious leaders to set aside any personal agendas and find a peaceful means for everyone on this planet to live together. Too many innocents are being killed by the egos of a few.