Qatar rolled out the proverbial green carpet for Saudi Arabia’s king yesterday as he arrived for an official two-day visit.

The warm welcome for King Salman included festivities on the Corniche, banquet meals and the presentation of a sword belonging to Qatar’s founder.

According to QNA, a new law has been passed this year outlining when the Emir should present Sheikh Jassim’s sword, the “highest national decoration.”

King Salman is the first person to receive the honor, “to cement bonds of brotherhood between the two brotherly peoples.”

For many, another highlight of yesterday’s visit was an impromptu ardha dance by the king as he stood next to Sheikh Tamim:

However, the occasion also appeared to roil traffic, causing many commuters to be stuck on the roads for hours.

No official announcements of roadblocks had been shared with motorists, who appeared caught off-guard by the congestion.

Today has to be the worst traffic jams in the history of Qatar. This might be some kinda world record with so many cars stuck for so long…

It is unclear what lies ahead today, traffic-wise.

King Salman is expected to head to Bahrain shortly, along with Sheikh Tamim, to attend a Gulf summit.

Regional security, fighting terrorism and enhancing regional cooperation are all on the agenda.

How did King Salman’s visit affect you? Thoughts? 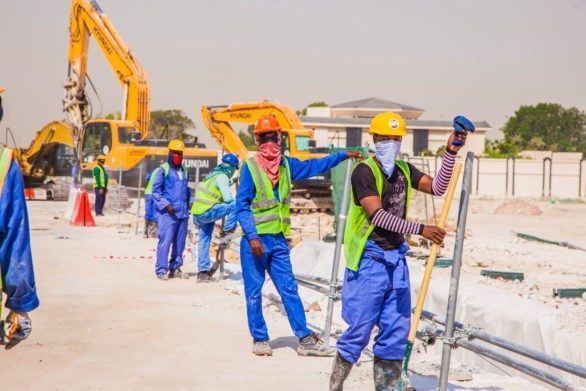