In a newly released report, the International Trade Union Confederation (ITUC) is once again pressing Qatar to abolish its restrictive sponsorship system and improve living and working conditions for the hundreds of thousands of low-income expats employed here.

The report, called “The Case Against Qatar,” comes days before the FIFA Executive Committee meets to discuss labor issues in the Gulf country, which is hosting the 2022 World Cup.

Included in the document are interviews with several employees here who outline labor violations such as a lack of safety on construction sites, unsanitary living conditions and the withholding of passports and wages.

Such abuses have also been witnessed and documented in the past by several international advocacy groups, including Human Rights Watch, Amnesty International and the United Nations.

The report also criticizes the Supreme Committee for Delivery & Legacy over the alleged abuse of 38 workers which ITUC said are working on the Al Wakrah Stadium, the first World Cup venue to be built in Qatar. The committee, however, denies that these are their employees.

According to ITUC, the workers, who hail from India, Nepal and Thailand, sleep in rooms under the bleachers of the current Al Wakrah stadium. They do not have access to their passports and make some QR800 ($220)/month.

“With more than ten men to a room, dangerous and unsanitary cooking facilities outside their door and no personal space, this is unacceptable. Al Wakrah site inspectors reported to the media they had signed off a ‘successful inspection’ – an indication of blatant disregard for human beings.”

However, in a statement sent to Doha News on Saturday, the Supreme Committee said that the workers interviewed by ITUC last month are actually employed by the Al Wakrah Sports Club, and are not working on the new World Cup project.

The committee added that new accommodations were being built for the men working for the sports club, and should be open at the end of this month. The housing would contain 24 rooms with kitchens and living rooms, and only two or three employees in each room:

Meanwhile, 108 men have thus far been hired to work on the new Al Wakrah Stadium project.

According to the Supreme Committee, they reside in some 29 rooms at a complex in the Industrial Area. It says they work eight-hour days, six days a week, and are provided three meals a day.

They also have access to internet, television and recreational facilities. The monthly wages of the employees, however, were not disclosed.

The treatment of the workers is apparently in line with the provisions of a new, 50-page workers’ charter released by the committee last month.

Under that document, companies could lose their contracts with the Supreme Committee for failing to pay employees in a timely manner, provide medical care to workers and ensure access to sanitary living conditions, among other stipulations.

While the charter is comprehensive, human rights groups have questioned the enforceability of the document.

Another concern is that the new rules would only apply to the employees working on World Cup facilities, such as those building the stadiums – or some 55,000 to 80,000 people.

That’s a fraction of the more than 1 million expats who are expected to be hired to construct hotels, highways and other infrastructure that is being built ahead of the tournament in 2022.

“Unless the government translates those provisions into national requirements, they are not going to be effective.”

Though human rights groups have attempted to wield Qatar’s hosting rights to the World Cup as a bargaining chip to improve working conditions here, FIFA has repeatedly refused to indict the Gulf country over labor violations.

During a weekend interview with Al Jazeera, FIFA secretary general Jerome Valcke said the organization could not dictate policy to Qatar.

“FIFA is not a United Nations. FIFA is about sport,” Valcke said. He continued:

“We can’t tell a country what should be their foreign policy. That’s not our role. It’s unfair if we get pressure from the rest of the world saying ‘hey FIFA, that’s what’s happening in that country and you have to change the way the country behaves.

Executive committee members of FIFA will convene in Zurich this Thursday and Friday, with Qatar’s migrant rights issues on the table for discussion.

Following a previous ExCo meeting last October, the world’s governing football body said it would not “ignore” concerns about the treatment of workers in Qatar, but that it would not interfere either.

For its part, Qatar’s Supreme Committee said in response to ITUC’s report:

“We know that there are issues. The country is not hiding anything, and it is good that everything is reported. While this process of change is not something that can be achieved overnight, we have the will and the commitment to see it through.” 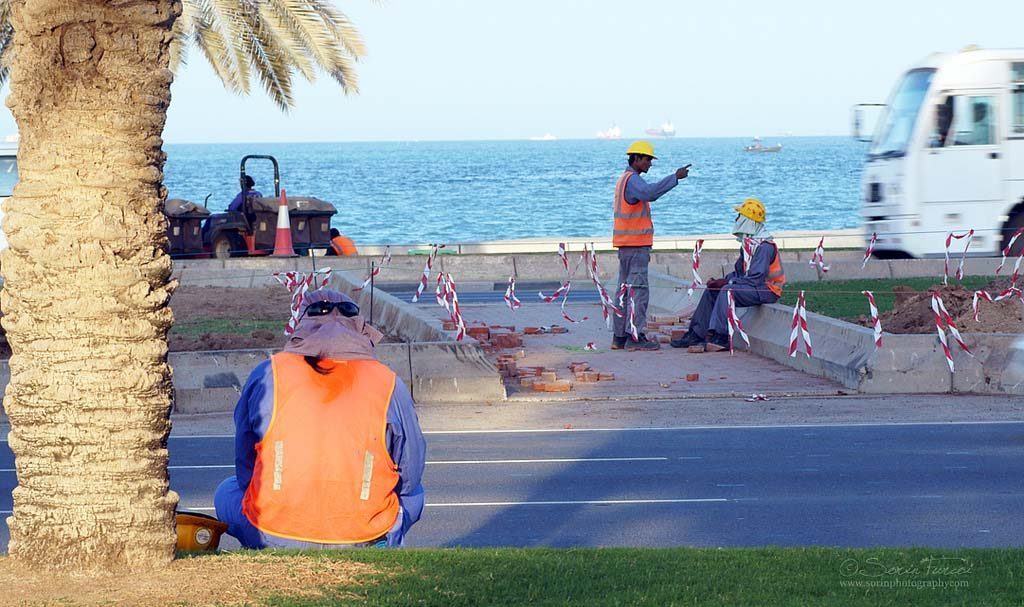 DLA Piper report: Changes to kafala expected as early as end of May Weekend weather in Qatar to be less sticky, but hotter